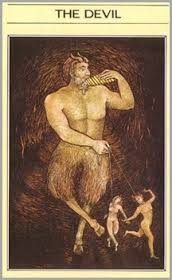 When the Devil card comes up in Tarot readings people generally get into an state of anxiety. I could be the same if I didn't know better, and besides I've been experiencing enough anxiety the past few days, without heaping more upon myself.

There are positive and negative aspects of this card. I understand the negative very well, as a person in recovery and a member of a 12 step program for over 20 years. The positive is that I became honest, open minded, and willing enough to accept my shadow self and I have been recovering ever since.

Pan is the great god represented here, once worshiped by the Greeks, as the Great All. He roams and haunts the woods and pastures of Arcadia. His nature is characterized as being wild, fertile and untamed.
In Greek myth, Pan was not considered evil, but simply being in his natural state, untamed, and amoral.

Not surprisingly his name is derived from the word 'panic' and he likes to give folks sudden frights. Whenever this card comes up in readings I do, though it seldom does, the thought that comes immediately to mind, is one who is in some kind of inner bondage.


As human beings, we are all aware of our shadow self. The saying. " we are only as sick as our secrets" is very true. It takes humility and honesty to face the truth, to confront our shadow side, and the most shameful parts of ourselves, and to look into the face of Pan, in acceptance. The acceptance that Pan is merely natural not evil, enables us to release our creative power when we face our own darkness.

If Pan does not face his shameful secrets, he will only exhibit a sense of superiority, projecting the worst of his character on to others,  manifested in the form of prejudice, bigotry, discrimination and persecution toward others, whom he considers 'evil.'
Posted by Unknown at 1:07 PM

"to look into the face of Pan, in acceptance". It was a difficult road to travel accompanied by our well known nemesis twins.But in the end I have accepted my darker parts. No more shame or guilt; no regrets. Life is what it is and I have accepted the past in order to move forward. And the end I have Learned to look at myself through the eyes of Love (bye bye Twins:D)
Wonderful post Catherine! thank you for reminding me all this <3
Hugs

Well it's nice to meet another "friend" of Bill W.'s. :) I like the "wild, untamed" version of this Devil; if it weren't for the leashes, I would say they are just having tons of fun. My shadow side operates mostly on fear, which is when I act inappropriately to try and make it go away.

Me too, I like the wild untamed version, but I always was a wild child, ;) Tons of fun til someone gets their eye poked out eh? Lol
Oh ya I relate to the fear you speak of Bev, big time. The great paralyzer!

Hi Catherine! I like very much your post; it's interesting your point of "our shadow side" and I think not only humility and honesty are required to face the truth but strengh and courage as well. You are brave woman...and talented artist! Muchas Estrellas!!!!!!

Awww thank you so much Las Magas. the 'shadow side' is what Carl Jung worte about. I love any Jungian philosophy and psychology. He actually was responsible for Alcoholics Anonymous when he told Bill W. and Dr. Bob about having a 'spiritual awakening', and that this was the way for drunks to get help.

You are very right strength and courage are essential, and the God of my understanding. Life is beautiful...hard but beautiful!

Thank you! I didn't know, I'll look it for reading :) It's very interesting indeed! and totally agree...life is not easy but it is worthwhile to live it! :)