The Moirai - Wheel of Fortune 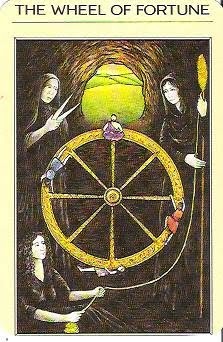 The Moirai or Fates are fascinating symbolic images found in the Wheel of Fortune, and were the incarnations of destiny and life. They remind me of the Three Graces or Muses,  and I suspect the Moirai carried over into the three theological Christian virtues, Faith, Hope, and Charity. Clotho was the Spinner, Lachesis the measurer and Artrpos the cutter whose name means 'she who cannot be avoided.'

Greek Mythology is about as confusing as family genealogy but even more so. For instance Uranus which symbolized the sky, was the primal Greek god. He was the son and mate of Gaea who symbolizes the earth and mother of all. Uranus had no father. According to Hesiod's  creation myth, Uranus was born of Gaea alone. Gaea was his sole parent. Weird eh? Makes no sense, but is all symbolic creation myth. But I do so love that Gaea was the mother of all.

The Moirai are the three deity sisters born of Zeus, the god of the sky and ruler over the gods of Olympia. It has also been said they had no father, but were the daughters of Ananke, the primeval goddess who was self-formed, as a Mother Goddess.
According to another myth, their mother was Themis the goddess of the divine order, and was " the messenger of the very first rules of conduct, established by the elder gods, and in the role of divine voice, she first instructed the primal laws of justice and morality to mankind."
Themis was also the daughter of Uranus and Gaea. I think it would be safe to say that the Moirai had a rather divine mission.

Well that is surely a complicated family! Lucky for them Christmas wasn't invented yet so they weren't obligated to have a family dinner once a year:D
I too love myths wherein the Mother was the origine of everyting

Ahhaahha that's a good one Ellen. Puts a new meaning into the old saying,' I'm my own grampa! '
Here's to the Goddess!