The Queen of Swords - Atalanta 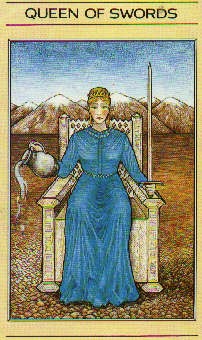 There are no mistakes. Really? Well I think I can agree with this statement, though it does sound like a ridiculous statement on one level, it does not mean perfection, and that we never stop making mistakes. This is far from being true. Our so called mistakes I do believe, are wake up calls, all part of our life journey, and they can serve us well, to enable a change in our behaviour for the better.

In spite of the mistakes, I don't need to panic. I do need to try to relax. I know this is much easier said than done, because of my human fight or flight reaction, but it doesn't mean I stop trying to do some serious introspective homework, to figure out what the next step is. I cannot fear my mistakes, but I do need to embrace them, in order to make the changes necessary in order to avoid a repeat.

We don't always purposely make mistakes, but regardless we can avoid many of them if we can let go of our demand for perfection, often creating our own problems.

The Queen is the perfect card to draw today, as she lifts up the individual struggling to overcome a panic attack ( namely me). This Queen uses her intelligence, and her intuitive passion to solve her problems.

Atalanta is embodied in the Queen, and when she was born, her father King Iasus, who wanted a male child, cruely abandoned her on a mountainside to die.  Atalanta was then helped by Artemis-Hecate, the moon-goddess, who sent a she-bear to suckle the child, and so, she is well acquainted with animal instinct. Later she was found and raised by a clan of hunters who found her. She learned to fight, and was a fierce hunter along side of men, and was always happy. Atalanta became the 'swiftest mortal alive' and was full of prowess. She greatly identified with the masculine world, and strove for perfection.

It is said that she was the only woman who joined the Jason and the Argonauts on the great ship Argo, in search of the Golden Fleece.

They say when you don't make mistakes you make anything
Your Moonbear is absolutely beautiful!!

I too love your Moonbear! :) Hope your panic attacks are subsiding. I find watching/counting the breath and the "rainbow" exercise helps me when I start to feel that overload of adrenaline. (The rainbow exercise is when I look around and try to find something in my surroundings for each color in the rainbow - it can be a helpful distraction.)

Mistakes keep me humble even though sometimes certain mistakes are a hard pill to swallow. Without them I'm never learn a darn thing!

Thank you so much Bev. You are all so encouraging supportive and it sure brings the rainbow into my life. Thank you for the helpful suggestions. I find the things I struggle with always come up in my daily draw on the days I really need that clarity and ability to let things go. This helps me a lot.

Thanks so much for the encouraging kind words Bev<3