Invocation of The Orchard

Here's a photo of my alter in my art studio. 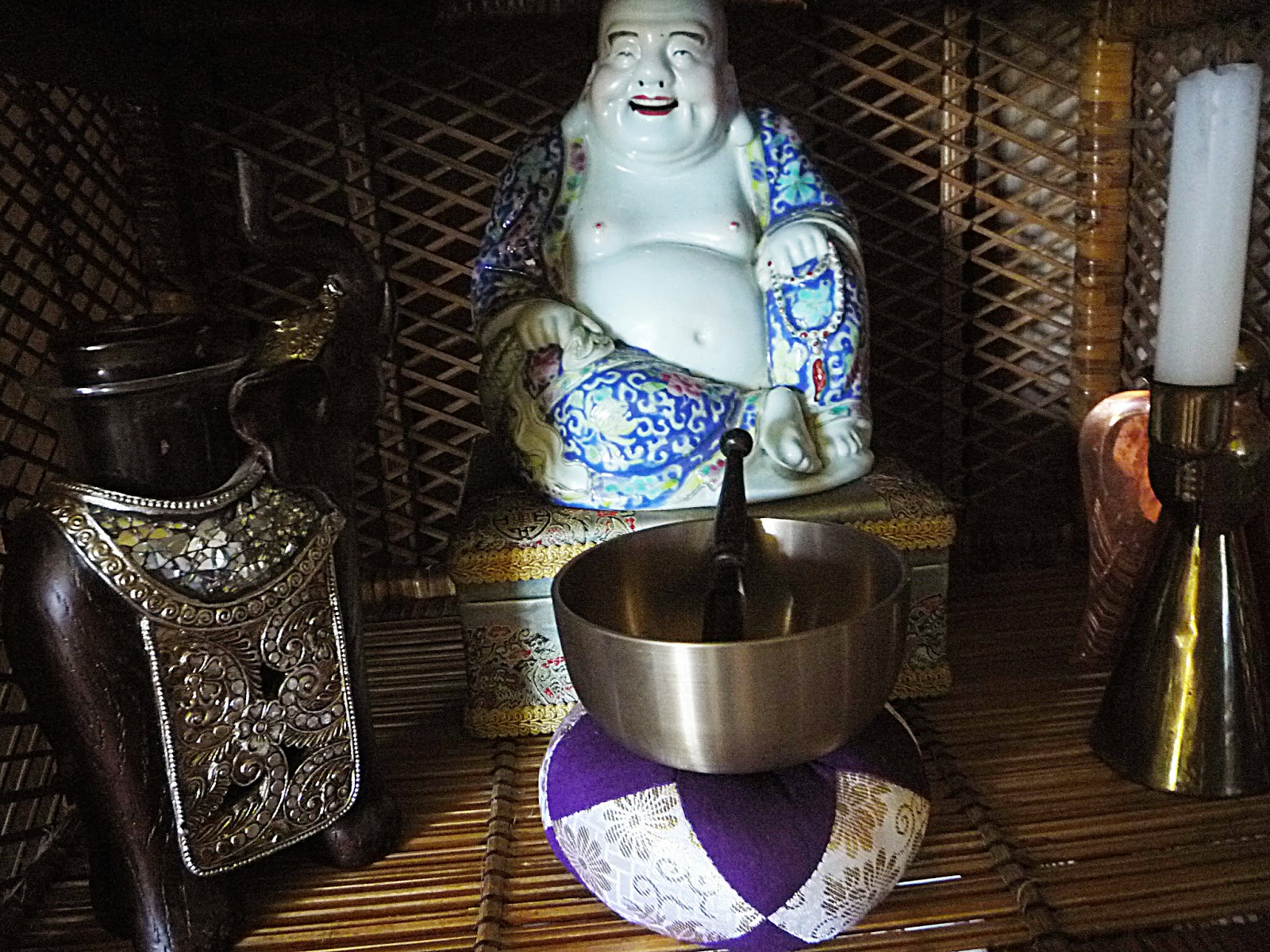 The old antique Buddha has been in my family before I was born. The story is, my father won it from a Chinese man he was playing poker with, many years ago. The Buddha was I expect, part of my father's cache from the game. He was a good poker player.When I look at this Buddha it always sparks the memory of my father and family. They have all left this earthly coil now, and I miss them very much every day.

Ganesh, the Hindu elephant God, of new beginnings, he is the destroyer vanity, selfishness, and removes obstacles, and he symbolizes abundance. I picked this up from a friend at our local market, and it has a small sandalwood candle, my favourite scent. I have a deep love of elephants. I have a vivid memory of going to the Metropolitan Museum of Art in New York City, and how in absolute awe I was, when seeing an ancient statue of Gamesh. I left him a few coins like everyone does.

The singing bowl, that invokes meditation, 'Singing bowls (also known as Himalayan or Tibetan singing bowls) are widely used form of bells.' In Buddhist practice, singing bowls are used as a support for meditation, when you tap it with the small stick. It was a gift from a friend who picked it up at a Buddhist retreat in Arizona. She gave it to me when she left, returning to Colorado.

The box covered in silk, holds my Tarot cards, and was also given to me by a childhood friend. It is very special to me, as is my friend.


The copper angel candle holder I picked up from somewhere I don't remember, from a second hand store I think. I love and believe strongly in angels in our lives.

My alter reflects my eclectic interests in different paths to spirituality.


When I first began to learn and study the Tarot, I was very drawn and interested in Kabbalah, Jewish Mysticism. I've always loved learning about mysticism and different Mystics, like Rumi, Julian of Norwich, Saint John of The Cross etc. Because of my family name being  Jewish Germanic, which I knew very little about, as my great grandfather came for Poland before WW11 and was an orphan, and so I felt a strong connection to Judaism.

I spent a long time learning about Kabbalah and how it was related to Tarot. I became very absorbed, and it became a part of my artwork, particularly when I was exploring different sacred trees that represented The Tree of Life, and I was fascinated to learn as much as I could. All of this study brought me to where I am now with the Tarot, and it has opened up the world to me in so many ways.

I found this prayer which I often say before I begin my readings. It helps to focus my heart on the God of my understanding. I find it comforting, in that I imagine walking through this great forest, The Orchard.

Invocation of The Orchard

"I pass through this orchard remembering that what I may learn, and what may pass before my
eyes will be for the purpose of healing the world, and bringing Unity into this dimension, into the plane of human awareness. This orchard is the transition point between the transcendant and the imminent - the abstract and the concrete.
My personal path can adapt and absorb this forest slowly, and as it sees fit. My basic personhood remains intact, while sampling the myriad forms and concepts in the grove. Drinking from the river of delights of the Creator's house, my own specific root into the infinite is a path of emanation along which I can safely and respectfully traverse.


"All the world is a very narrow bridge - but the point is to be fearless."

Sepher Malchus is the grounding point, where I am centered, and where I will return after contemplating the trees, springs, fragrances, and many-faceted gems in the enclosure. Sepher Malchus is the point of connection and return to my personal concrete reality and viewpoint, to my ideal stability."

*  Sepher Malchhus relates to the Earth.

Email ThisBlogThis!Share to TwitterShare to FacebookShare to Pinterest
Labels: Buddism, Creator, Gemesh, Hinduism, Invocation of The Orchard, Kabbalah and The Tarot, Sepher Malchus, Singing Bowls, The Tree of Life

Our spiritual journeys parallel in so many ways. I left the fundamental Christian church I grew up in (in my early 30's) and spent the next years searching for the TRUTH. I immersed myself in Buddhism, Hinduism, Taoism and Paganism; I studied with the Kabbalah group Bnei Baruch for a year and a half and read many of the mystics of all faiths. I ended up with a lot of spiritual practices I enjoyed, but always found something dogmatic about each path that I could not swallow. But then I realized it was the practices not the faiths that had changed me. So I figured I could just be happy with that. :)

That is really neat to know. We are on the same Psychic Network! LOL!

I certainly relate to what you are saying Bev.

I thank God my mother had an open mind, as she had a strong faith, but never ever forced it onto me, and she always let me find my own way and so I did!

So many "recovering Catholics or recovering _ _ _ fill in the blank from dogmatic religious backgrounds are totally turned off and never find their way back.
Religions should never be about power and control. Abuse, that's what power and control are about.

Thank you so much Bev for sharing!

I am joining the eclectic group too! I've been searching for God my whole life long. Taking bits and peaces with me along my journey from different philosophies and religions. and every time when I think I've got it I know it is time to move on
I love your altar! I always like to see how others set up their sacred spaces
(Sometimes I envy your love of this one deck)

Ha!! Well we won't exactly start our own religion, but we will be of like minds and that's a good feeling to know!
And it's a good feeling when you start to find you way by getting lost!
I saw something yesterday about Jim Hensen. He said the most sophisticated people he ever met were those who had the heart of child or were still childlike. That's very true especially when it comes to spiritual matters. Jesus said the same. People let their adult brains control there childlike hearts, trying to control and use power to convert etc. Children have simply faith and trust, which I think gives them a close connection to the Divine.
It is interesting to see others sacred spaces Ellen, and it is a beautiful thing to have. Thank you <3
I have a hard enough time focusing on this deck, but I am passionate about the Mythic Tarot and it is more than enough for me. I am going to get another deck when I can. A Celtic deck or maybe one based on real First Nations spirituality.