The Hermit - The Way To Wisdom 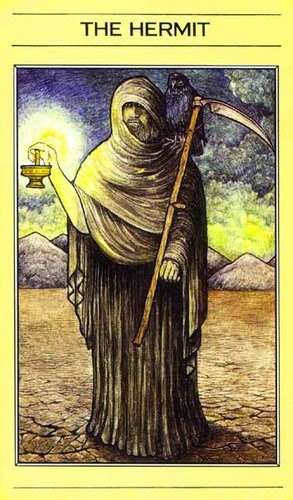 I love the Hermit card, as I have always had a thirst to understand spiritual matters. This is a card of strong healing, as a result of solitude, loneliness, patience, and from which comes, insight and understanding.

Who is this Hermit? He is the ancient God Cronos, who's name means time. The Fool, the first Major Arcana card of the Tarot deck, has four moral lessons to learn, and the last of these, is the lesson of time within the cycle of life, and the lesson of mortality.

Deciding to move to the countryside, being in close contact with nature, has allowed me to focus my mind and heart. Through quite reflection, and the solitude of living alone has provided me with serenity amidst the storms of life.

Spending my childhood and early youth, and early adulthood in the city, I understand all that it has to offer. As an adult I came to the realization I was unhappy, and that I was the only person responsible for my own happiness. After asking myself, when was I the happiest in life, the answer came to me immediately. It was when I spent hours in the country. I am so grateful to have had the opportunity to now live in rural Nova Scotia for twenty years.

There is a deep part of my soul that has become the Hermit, and believe this is why I identify with this card so much.

I think of the wise words that the late Robin Williams echos my thoughts and feelings about the Hermit.