The Fool - The Journey Begins 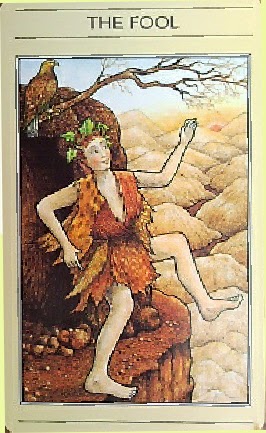 The Fool exits the solitude, and isolation of the cave wide eyed, with an open heart and mind. He is not afraid of risk, and is full of enthusiastic, contagious optimism.
He has all the tools he needs, and energy abounds within his carefree being, with pure intentions. Willing to leap into the unknown, and to start anew, he is eager to develop his capacities and potential. Lacking in foresight and being naive, makes no matter, as he is ready for the journey, the journey of life, and he is not fearful of getting lost along the way.


I have to say I love The Fool. For me, my identification with him goes back to my early life of studying Mime, and Commedia dell'Arte. Originally back in the late 70s, I had hoped to travel to a beautiful place called Paris Maine, to study with Tony Montanaro at the Celebration Barn. Instead due to financial, and geographical constraints, I went to Toronto and studied Commedia dell'Arte.

There are no regrets really, but I so do wish I had the chance to have met and studied with Tony. I believe he was one of a kind. A man who understood what it really meant to be The Fool, with humour, humility and humanity.

The Fool has an ancient history. which I believe is very worth learning about, because there is much to learn from these so called agents of change, as the journey begins.

Lovely movie. It looks so simple but this requires great skill. The Fool: We love him, we fear him, we envy him. but nobody can truly ignore him. I try to let him more in my life lately. Don't they say: No fool like an old fool :D