The Lovers - A Heinz 57 In The Shadow of the Beloved 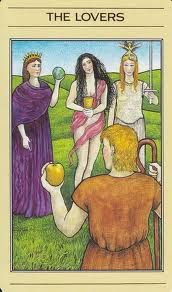 The sign of Gemini, the twins, and my birth sign, are associated with The Lovers. Love, friendship, and partnership, are all suggested in this card. There is an implied duality of earthly and divine love. I see it as a push and pull tension between the two and having to make a decision.

I reflected today when I drew this card, on how I have always longed and searched all my life, for a relationship with divine love, but truthfully in the past, I was more preoccupied with earthly love. My search for the Divine involved attending Church, with my mother at a young age, which I know now, had planted the seeds of faith. I wasn't so much searching then, not until I hit puberty during my adolescence.

When I was 13, and a very troubled kid, I would often go to find solace, in a big Cathedral church that sat on top of the hill, overlooking the city where my family lived. I could find peace and comfort there. I loved the statues of the Blessed Virgin Mary, and felt a deep connection with her. Today I see why, because of my identification with the goddess.

I then began to meagerly, explore Zen Buddhism, and soon went on to seriously involve myself with studying Christianity in a formal way at 18. I was soon baptized and confirmed as what is commonly known as an Anglo-Catholic, which has all the bells and smells of Roman Catholicism, minus the belief in the infallibility of the Pope, and a few other differing adherences.

Once I hit 30, I decided I had really always been very drawn to Catholicism, and so I converted, took all the classes, joined a church and became a Roman Catholic, prior to all the sexual abuse issues coming to light within the church.

After several years of being a Catholic, and around the time I became a member of a 12 step program in the 80s, my ideas surrounding belief, slowly began to evolve, into what I would call less religious, and more spiritual. I came to realize I could no longer be a member of a church that was full of corruption, that embodied abuse, through power and control. I was finding spirituality and fellowship, that was second to none, in the rooms of recovery. I knew this is where I belonged.

At this stage of my life, I have a positive relationship with the Divine, that is about knowing the meaning of the God of my understanding, and feeling a deep sense of serenity, because of that understanding.

I am so blessed to have had a very open minded and loving mother, who never forced her religious beliefs, and let me find my own way. You might say I have been a Heinz 57 religiously.
My mother gently instilled and imparted her faith, gave me a sense of wrong and right, and a belief in God.  I am so very grateful that we were able to share our simple faith in those quiet moments, between mother and daughter, that have stayed close to my heart, all of my life, and always.

Email ThisBlogThis!Share to TwitterShare to FacebookShare to Pinterest
Labels: 12 Step Recovery, Anglo-Catholic, Buddhism, Catholicism, Christianity, Earthly/Divine Love, Friendship, Gemini, Love, One Whisper of the Beloved, Partnership, Rumi, The Divine, The Lovers, The Shadow of the Beloved

My dear friend, we share a similar search for a relation ship with the Divine. I've been to several churches and came from Buddhism back to Christianity again. Then jumping into wicca and finally found God in the here an now, multifaceted, each day different and always the same.
Whatever I choose to call God, I know I am loved and heard
Hugs

So nice to read your words Ellen. I am not surprised that we've had a similar kind of search . " God in the here an now, multifaceted, each day different and always the same.
Whatever I choose to call God, I know I am loved and heard" I love that!