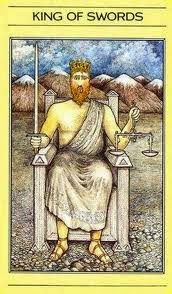 Truth? I am little intimidated by the King of Swords, or the folks with this personality type. When I really dig into the reason why, I think it is because I immediately begin to compare myself intellectually, and presume I am not on the same intellectual level as this person. Comparing ourselves to others is a basic common human character defect. The more insecure within ourselves, the more we compare.This is not a healthy out look I know, but it's true. It is futile to compare ourselves to another. It will always leave us feeling less than, that we just don't nor can we ever measure up to an unachievable standard, that really is an image that exists in our minds.

The King of Swords can be greatly admired for his creative intellect, and attractive, dynamic leadership qualities, but not so much for his lack of ability to respond to his own emotion, or for considering the feelings of another. He appears to be emotionally cut off, relying on his intellect for success, as opposed to his heart, although his ideals, and sense of fairness are very lofty and well intended.

He appears to be in harmony or perhaps likes harmony in his environment. No one is perfect I know, but he sure can give off that impression, as he is Odysseus, crafty, guileless, known as the Wiley one. Fact is, this King is a wanderer, not rooted is his heart, nor in his relationships. He's not big on empathy and compassion, but is known for his decency and fairness. He's a bit of an enigma and a contradiction.

We all have contradicting traits. The message here for me is to be aware of these traits, and to be compassionate toward others, and toward myself for these shortcomings, and character defects. No one including myself should be intimidated by another's personality, and I certainly hope no one is intimidated by mine.
There is so much to learn, from people we admire and  love, and sometimes especially from those we do not love or admire, they have much to teach us. When the student is ready the teacher will appear. I've had some major important lessons in my life brought to me by very special people, but maybe we learn the most on a daily level through our daily encounters with the people in our lives. Often the same lesson has to be given us over and over again
I wonder when I will be graduating from preschool :D
Hugs

True for me too Ellen, many special folk, but for me those I had the most difficulty with, and who were perhaps the most unlovable are often the ones I learn some of the most important lessons from. :) we say in AA there is no graduation :) Maybe from preschool, but not from life. Hopefully we don't have too many lessons we have to repeat. But then again, I've learned a lot from failing. ;) Though it sure doesn't have that 'feel good feeling' about it.