I Found My Inner Empress at the Paradise Restaurant 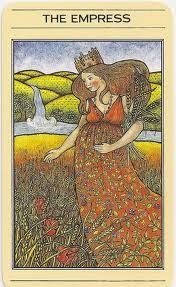 I am back to feeling like the goddess that I am. This is what the Empress message is, for me today. I went through a test, and I passed. Whew it was a rough one.
The Empress I think is a little like Eve, before the 'Fall'. She may be tested and tempted, but the Empress unlike Eve, doesn't Fall, though she does have her shadow side like we all do, she is full of practical wisdom, full of love, and creative imagination. She signifies, reflects and reminds us of both our spiritual and earthly nature.

What do I mean by saying I am a goddess? I don't intend or expect to be worshiped. Though I would to be grateful to have a King to my Queen! But, this is not what I am talking about at all. It is about acknowledging the divine within myself. Knowing, believing, and understanding that I truly am a spiritual being, having a human experience.

We all have the capacity to be divine souls, and even angels, though we may not know, understand, or believe this to be so. I have met many angels in human form, and they do walk among us, seen and unseen.

No one gets through life without experiencing the metaphorical walk through the coals of fire in life. Some walks seem harder, and there is no point in judging another, until you've walked a mile in their shoes. Nor is it useful to compare our difficulty, struggle or pain with others. The acceptance, and willingness to learn, to even embrace, whatever it is we are facing from day to day isn't easy, but it can be done, by drawing on our deep inner resources, in the depth of our divine souls.

I want to tell you about one of the angels I met, and he saved me from myself.
Almost thirty five years ago, I was a young 27 year old young woman and I tragically lost the love of my life, my late husband Bill, that I had been married to only four months. He suffered from brittle diabetes, and paranoid schizophrenia and died at 26.

I was deeply depressed, and very close to the edge. I wanted my life to end. The thought of how my suicide would devastate my family, I knew I could never take my own my life.  So I drowned my sorrow in booze, and tried to escape into successive, destructive relationships, trying to fill that desperate gaping hole, of loss and loneliness. There was a young man I met one night after leaving a dance at the Nova Scotia College of Art and Design, where this young man and I where were both students. I had been running around in such an emotional mess of despair and chaos. I was at my lowest point in my life.

As I headed home, walking down the street, he called out to me, saying he liked my red cowboy boots. I didn't know this young man, but we started up a conversation. He was so happy, like a ray of sunshine that had suddenly took away my shadows. We walked and talked, until early morning, when he asked if he could buy me breakfast at an all night diner in downtown Halifax, that many art students would often frequent in the wee hours of the morning. It was such a unique hole in the wall, and ironically it was called, Paradise. It had a rich history dating all the back from the 30s which lasted right into the 80s. Originally the Paradise was the Crouse's Restaurant, considered one of Halifax's finest dining establishments. It wasn't exactly that, when I was there, but it certainly was a memorable experience every time you went, and the breakfast was wonderful that special morning, with all the fixins.

After the Crouse's Restaurant closed, it changed ownership, becoming Mader's, and I've included the menu ( lots of fish), even fresh moose steak! It is actually quite similar to the Paradise menu. Unfortunately, I couldn't find any photos of the Paradise, which was first opened in the 60s. I'm sure this is when they must have come up with the infamous Fish Dog. It closed shortly after, in the 80s, which sadly, heralded the end of Paradise. 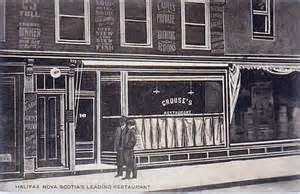 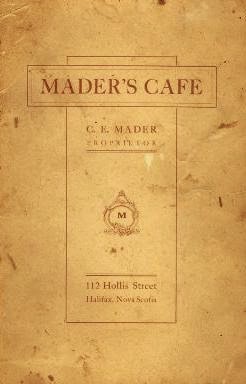 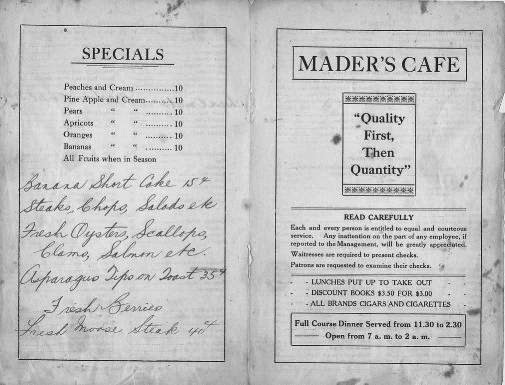 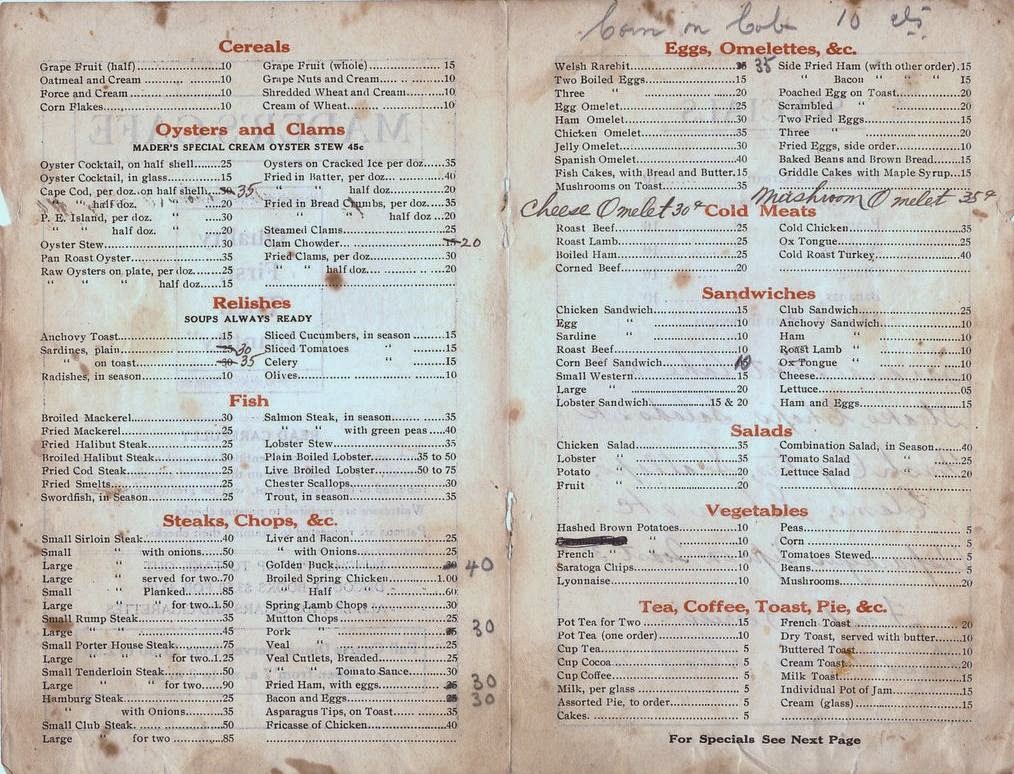 When you walked inside the Paradise, first thing you noticed were two very large, hand painted murals covering each wall, end to end, with Adam and Eve before, and after the fall. They even had the fig leaves over their naughty bits! I always felt good being there. The paintings were hilarious, and made me laugh. It was kind of like nostalgically going back in time.

Jute boxes adorned each booth, and it had a greasy spoon kind of unique menu. If you were really brave, you could order a Fish Dog! I never was brave enough, cause well, it really just didn't sound right. The waitresses were all characters right out of novel, or from a CODCO skit, most of whom were from very rural parts of Nova Scotia, come to work hard, in the big city.

Eric, the angel and I talked for hours, heart to heart. I cried, he listened, cared and loved me, when I couldn't do that for myself. He made me laugh so hard, I soon forgot my problems, and started to feel so much better. We became good friends after that night for several years, until finally we both left for different parts of the country, and I never saw him again.

I lost touch with Eric. After looking several times, I have never been able to find him. He's comes to me in dreams, and once I felt so certain that he was in Halifax, but I never got to find out if he was, as I was living in another city by then. I think of him often, and wished I could find him to thank him for saving me from myself, when I did not believe, know or understand, that I am a spiritual being, having a human experience. Eric helped me to see this, and I am so grateful to him for being my angel.

I still wear those old 35 year old red cowboy boots, that I bought in Toronto, where I first met my late husband Bill, the angel who watches over me now.

My dear Catherine I am so glad you've found your mojo back and the willingness to embrace your Inner Goddess who was waiting for you all along.
And thank you for sharing this beautiful and personal story.
Big Hug

What a beautiful story. I've had a few wingless angels in my life too. :) I hope one day someone will be able to say the same of me - that I touched their life in a positive way with no expectation of anything in return.

Thank you so much for saying that Ellen. <3 I'm workin' my mojo!

Thank you so much Bev <3 We can't underestimate how we touch others or help them. A smile, a comment, kind gestures can mean the world to others. When we have kindness in our hearts we can't help but touch others. Like you and Ellen touch mine <3 XO