I Do A Great Lizard Impression...Really - Two of Swords 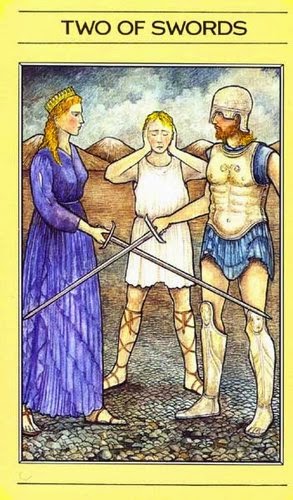 When I see this card, the Two of Swords with the dude in the middle, the two individuals pinning him in, and threatening with swords, I think of that saying, ' reality sucks '.  Life is hard, no two ways about it. We can feel we're between a rock, and a hard place, damned if we do, damned if we don't. So just what do we do?

In the past, I would run from reality. Sometimes I think it's just in my DNA. Regardless of being a recovering sober alcoholic, for almost 21 years, come January 2nd 2015, I can still feel my propensity to want to run away in my mind, when reality sucks. Old habits do die very hard. Perhaps this is simply a human characteristic, wanting to escape troubles or painful situations, and we are born with a the fight or flight instinct. After feeling this initial instinctual reaction, we do have a choice, to either react, or respond accordingly.

Swords represent the intellectual aspect of ourselves, and the Two of Swords urges to us to take action with our rational mind, instead of ancient lizard brain. We really need to exercise discernment, diplomacy, and commonsense as an adult, responding, instead of reacting to a difficult situation. Otherwise, we can really get into a pile of mess, and I can certainly attest to that. We can even do an injury to ourselves, or to someone else, in particular those you love. So my biggest New Year's resolution is to do myself a big favour each day, and continue to grow by getting real with reality.

In the 12 step program we have a slogan. H.O.W. stands for Honesty, Open mind and Willing. This is how it reality works for me, whether I like it or not.