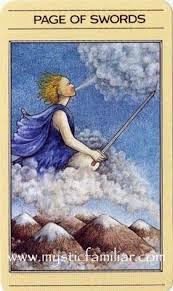 Here in the Page of Swords, we meet Zephyrus, brother to Boreas. They were trouble makers stirring up the forces of nature with storms, and various brouhahas. Fortunately, his kind and loving bride Iris, civilized Zephyrus, and his disposition was greatly transformed, as influence of Temperance would definitely affect his attitude and behaviour. Not an uncommon occurrence when people become coupled. When deciding to commit to a relationship, it is with hopeful expectation the two individuals will be a positive influence on one another.

Gossip can be the downfall of the Page of Swords, and we must guard against it. There is also the possibility that because of the emergence of new ideas, this can create petty jealousy, which causes disruption, resulting in malicious gossip, from those envious of independent thinkers.

If you are the type to always concern yourself with the opinion of others, you can easily fall victim to this kind  of negative and destructive behaviour from another. People who exhibit this negative character defect, are often very perceptive and aware of this vulnerability in others, and will use it, to promote their own agenda, by way of hurtful gossip, that can wound deeply.

As well, there can be a tendency to make mountains out of mole hills, much the way children do, because they don't know better, they are often self-absorbed and don't understand adult matters, such as being held accountable and responsible for your own actions.

There are still many folks who carry on behaving in this manner, when they supposedly have reached the age of maturity. I avoid these folks, because if they can draw you into their chaos they will, so it best to avoid them, especially if this envious and spiteful behaviour becomes apparent, lest you fall prey to petty quarrels, finding yourself in a constant state of stress. Usually the antecedent to gossip is resentment, not a luxury many people can afford, and feelings of worthlessness often causes another to compare, leaving one feeling miserable, with increased feelings of failure. It is a downward spiral from here on in, if nothing changes.

On a much more positive note, the Page represents beginnings and are messengers. The Page of Swords is associated with the element of air, signifying quick mental, youthful energy, and powers. Swords represent the intellect, where reason prevails over emotion providing clarity, and cutting through muddled thought. Swords are also associated with the air signs, Gemini, Libra and Aquarius.

It is suggested that we be accountable to ourselves for our behaviour, and that we take responsibility for our own  happiness. Self-worth and happiness are a direct result of a confidence, tempered with humility, when one draws on, and develops the mental powers, and creative imagination, that the Page of Swords reflects through his curiosity about life, the world and people. 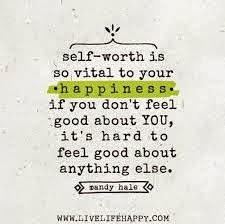 "cutting through muddled thought." For me this page is like a fresh wind through my mind. Clearing depression and self pity. I like it how Zephyrus is blowing the clouds away and leaving us a blue clear sky. :D

Yes Ellen I understand depression and self pity can really muddle the mind. We have a saying in AA. Poor me, poor me, pour me another drink! I'm so grateful I don't have to stay there any more!