Where To Find The Goddess - Persephone (The High Priestess) 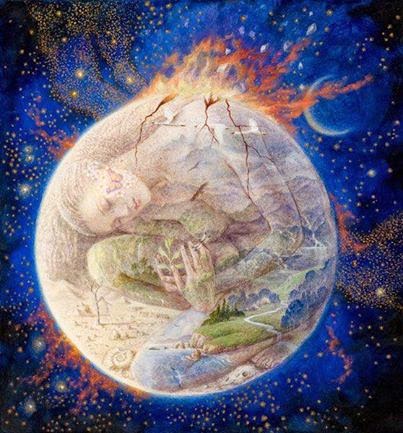 After drawing yesterday's card, The High Priestess ( Persephone), I felt compelled to learn more about this Greek Myth and it's meaning. I am heartened by the description of the despair, and grief that was shared between mother and daughter upon their separation, when Persephone had been abducted by Hades. In some interpretations of the Greek myth, Persephone was raped by Hades ( her uncle) and betrayed by her own father, who had set up the whole abduction, without Demeter's or Persephone's knowledge.


I found a really fascinating site that explores the connection between feminism and ancient Greece. There is a lot of discussion and reference to women helping women, and having as much heroism, and even more so in my opinion, as the male heroes in Greek Mythology.

In the development of my own spiritual journey I had been at first more or less comfortable with the idea of God as being male. Then years later my idea changed to seeing the Creator as being non-gendered. Presently, and increasingly, what is very prominent in my psyche, and what is beginning to define my interpretation and perception, is the belief in the Creator as Goddess. Some may feel dismissive of the concept of reclaiming the Goddess as being too 'New Age'. I am not one of these as it now feels very natural and comfortable to me.

I am always lead back to Dr. Clarissa Pinkola's book about myths and stories of the wild Woman Archetype. So I turned today to Women Who Run With The Wolves only to find out that Demeter, who is the Mother Earth Goddess, in her deep despair in searching for her beloved missing daughter Persephone, comes in contact with the dancing Baubo; The Belly Goddess, who makes Demeter smile just a little, which then turns into a big belly laugh. Baubo brought Demeter out of her depression, and helped to restore her energy, so she could continue searching for Persephone. Baubo is drawn from the Neolithic belly Goddesses. You know the ones, without heads, and sometimes no feet or arms? They are talisman of women-talk, the kind of talk that wouldn't happen in the company of men and they are much more than fertility goddesses, but symbols of Matriarchal culture.

Now as a group of united women, the old crone Hecate, the sun Helios, and Baubo all join Demeter in searching for Persephone, and they are ultimately successful in reuniting her with her mother.

" The World, the land, and the bellies of women thrived again " - Dr.Clarissa Pinkola Estes, Women Who Run With The Wolves

Where would we be without our "woman's bible". This is again a beautiful painting of the Goddess.
I can relate so well to the shifting perception of the Divine. For me it is almost constant fluctuation between the three options you've mentioned here
But honestly, I don't think God(dess) would mind :D
Hugs

Look Ellen I have read this book three times now and I am still learning from it, as it is so chocked full of wisdom and information.

My perception of the divine has long been with the Goddess - even at age 9 that made more sense to me. Perhaps because I was raised by a single mother… :)
I've read some interesting things about the Greeks and feminism. Suggestions that there was a changeover from matriarchal to patriarchal culture, and that the effects of this can be seen in the myths, like the one where someone kills his mother to protect his father and is let off the hook by the judges (the names escape me currently).
I'd never heard the bit about Baubo - which matches a Japanese Goddess story about Uzume making the Sun Goddess Amaterasu smile and come out of her cave to return light to the world - interesting parallel :D
And yes, a wonderful painting, Cat!

You are fortunate to have had that influence from a young age Kerry. Me too I was pretty much raised with a single mum too, and she imparted a spiritual open mindedness which I am very grateful for. Yes I vaguely remember that story but can't recall it.
There are many similar stories and Myths throughout world cultures, which I love and am very fascinated with. I remember my painting of the Inuit Myth about Seal Skin Soul Skin, a Danish friend told me who bought the print of my painting told me the myth is similar in Denmark only the opposite. It is the man in Denmark who comes from the sea and falls in love with a human, and they have three children that are left in the sea. In Seal Skin Soul Skin it is a fisherman that falls in love with a seal and has a child who is left on the land.

That is fascinating about Uzume and the Sun Goddess Amaterasu! I'd never heard of her! Thank you for telling me that Kerry! <3