The Secret of the Moon 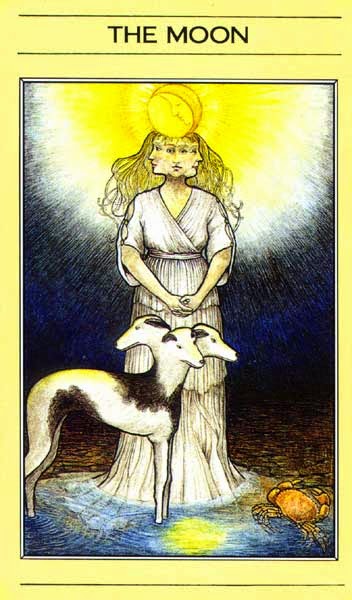 The Moon is prone to shaking fits. True story! No one knows why, however scientists speculate the moon has earthquakes and tremors that may be due to the tidal force of the earth. It is an understatement to say that the Moon greatly influences the earth.

I have always had a strong connection to the moon and I often say I am 'in love ' with La Luna. Perhaps because according to my astrological chart my Moon is in Pisces and I certainly do relate to the element of water more so than and other.

Some folks may feel when the full moon appears they themselves may feel ' prone to shaking fits '! It is true that our sleep can be affected and disturbed during the full moon. We humans after all are walking water bags, being made up mostly of water, so it really does make sense that the moon would influence our bodies. According to evolution we all came from the sea.

There are many unknowns about the Moon, and today I found a really interesting history regarding it's symbolic meaning relating to the Tarot. Here's what I found out about the symbolism of the XVIII arcanum.
The Moon is definitely a spiritual card and represents the spiritual journey, as the three faces represent Hecate’s power over heaven, earth and the underworld, ( the unconscious ). 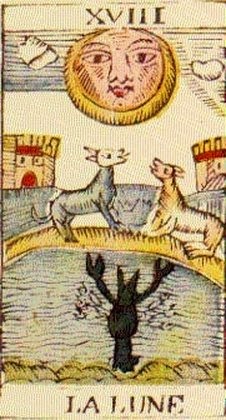 The Moon card is the eighteenth of the major arcana. In the Tarot of Marseille, from which most later decks originated, its symbolism appears at first glance rather peculiar:  a humanized image of the moon shines over a mountain with two towers, and two animals which resemble dogs seem to be howling above what appears to be a body of water with a crayfish in it. None of those symbols can be clearly associated to the familiar ones from the Jewish-Christian tradition prevalent in Europe at the time in which the Tarot first made their appearance. It has been suggested that the origin of the Tarot is not European, but there is no clear consensus of what tradition might have originated them and what circumstances might have brought them to Europe.

As it is often the case in esoteric matters, the obscurity is readily dispelled and the meaning of the symbols easily reveals itself if one can find an appropriate key.
In the case of the Moon arcanum, a key can be found in an unlikely place:  the Mesopotamian Epic of Gilgamesh. The Epic describes the symbolic journey of Gilgamesh to the City of the Gods.  Gilgamesh, devastated by the loss of his friend Enkidu, decides to make a spiritual pilgrimage to the place where the immortals dwell, and ask UtNaPishtim (the ancient fisherman Noah), the earliest human who managed to join the assembly of the Gods, to share with him the secret of eternal life.
When Gilgamesh approaches mount Mashu, the sacred mountain of the Gods, he sees lions roaring on the mountain passes, and is terrified. He then invokes the moon god Sin, protector of travellers, to assist him in his journey, and at night dreams of fighting and prevailing against the lions. He finally reaches the foot of mount Mashu, which guards the rising and setting of the sun. The mountain has two peaks, which extend from the netherworld below all the way to the sky, and a long, dark tunnel leading to the City of the Gods, guarded by humanized scorpions. The scorpions, realizing that he is not only flesh, but in his spirit and soul also immortal in heaven, agree to let him through.

It is easy to identify the elements of the narrative with the symbols contained in the Moon arcanum. The humanized moon is the god Sin, protector of travellers. The mountain is the sacred mount Mashu, which guards the rising and setting of the sun. The two towers are the twin peaks of the mountain, which connect heaven and earth.  The two dog-like creatures are lions on the mountain passes, roaring in their glory. Finally, what appears to be a crayfish in a dark pool of water is in fact a scorpion guarding the entrance of the tunnel which shall lead the supplicant to the City of the Gods.
The image of a crab, scorpion or scarab (words which all share the same root krb) as custodian of immortality is common not only in Mesopotamian cultures, but also in the Egyptian and biblical tradition. In the Book of Genesis those humanized crabs are called cherubs, and guard the path to the tree of life.

The lions are also a symbol common to most ancient cultures, and represent the bestial forces of human passions, which need to be overcome if the spiritual journey is to be successful.
Likewise, the notion of a sacred mountain as the dwelling of the Gods is shared by most ancient traditions, and the pinnacles or towers can be variously identified with the matzevot, obelisks, menhirs or pillars which in many ancient cultures symbolically connected heaven and earth.
Finally, the moon is a symbol of spiritual journey and rebirth, associated in different traditions with Osiris, Dionysus, or Ba'al.
The parallel with the biblical story of Jacob's dream is also worth noting. In Genesis 28:10-19, Jacob spends the night in the wilderness (where, Rashi adds,  he became afraid of the wild beasts). In his dream, he sees a ladder connecting heaven and earth, populated with angels. When he wakes up he says: "How dreadful [is] this place! this [is] none other but the house of God, and this [is] the gate of heaven." Before leaving the place, which he calls BethEl (House of God), he sets up a matzevah (pillar).

this painting is gorgeous. Catherine. I love the blend of blue and purple colors.The article is very enlightening. I think symbols are popping up everywhere, in every culture, being the language of the collective unconscious

Thank you very much Ellen. I sold it a while back to one of my painting professors and friend who is from Newfoundland and very close to the sea of course and identified strongly with it. The story of Seal Skin Soul Skin, that goes along with it is wonderful.

Yes the themes of spirituality are ancient and common in one way or another in all cultures I have found. A friend from Denmark she has the print of my painting and she told me of a similar Danish myth.
You can find the story of Seal Skin Soul Skin online as it is in Women Who Run With The Wolves by Dr. Clarissa Pinkola Estes.