Nine of Swords - Antidote To Worry 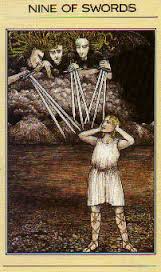 I spent yesterday from early morning until late at night in town running around having various appointments. In between my numerous errands I made a conscious decision to slow down. I took a break with coffee, a doughnut and visited with a few good friends to talk.

My mind over the past week and a half had been filled with worrisome thoughts and I finally concluded that I could no longer continue on like this, as it was simply creating more anxiety and worry. I needed to get myself in gear and do something proactive to address the issues I was worrying about, and so I did. I feel so much better now. Drawing this card was full of synchronicity in meaning for me today.


The Nine of Swords sure looks like it's game over for this poor sop, with those Furies, the creatures  overhead, that pursue and threaten him with swords. It is the card of the nightmare. The initial impression one might have, would be impending death and destruction, signifying the end of life as we know it. We are likely to be inclined to react with the emotion of overwhelming anxiety and fear of what awaits us in the future.

However, Swords are the suit that represents the intellect, not emotion. Swords cut through muddled thought, in spite of our head being filled with worried thoughts, causing us to loose sleep at night, resulting in more stress, fear and anxiety that affects our mind, body and spirit. Action is the best antidote to our mental malaise. Yes life can hand out some real shit sandwiches, but the good news is we don't have to eat them!

I am glad to hear you are feeling better again. You are right, action is a great way to keep worries a at bay. Simple tasks like gardening and cleaning can be so relaxing. And of course talking about them, like you did, or just writing then down is also very helpful.
#shit sandwich LOL!!!