King of Cups - Where The Nightingales Sing The Sweetest 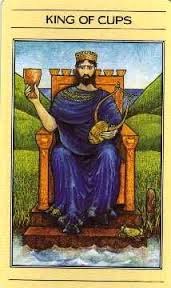 Early this morning I had a very vivid, lucid dream, that stayed with me. It caused me to have confused feelings of happiness and sadness. I asked a question of the cards, and then drew the King of Cups, which corresponded with my happy/sad dream.

The sad story of the singer Orpheus who was lonely and unhappy, is embodied in the King of Cups. Orpheus was both priest and healer but was unable to heal his broken heart, and was the wounded healer.  He met with a gruesome revengeful death, at the hands of the jealous Dionysus and was buried by the Muses at the foot of Mount Olympus. There, the nightingales were said to sing more sweetly than anywhere else on earth.

Many of us relate to this wounded healer we can heal others, but can not seem to help ourselves. When the King of Cups is manifested in our own relationships, we find ourselves losing the very thing which we most desire, because we lack the trust in our personal lives, and matters, in the realm of the heart, become rather like a self fulfilling prophecy.

The King of Cups ultimately does not trust the world of the unconscious, which he is unable to see. He is reluctant to submerge himself into the water of emotions, as he fears he will drown if he lets go, and gives his heart to another.

When we ask a question of the cards, we may not like the answer. It is better to know, than to have false hopes or illusion, and it is a good thing to accept the reality we might be dealing with, so we can be better prepared. It is not always easy to accept that our dreams and reality are not always the same thing. 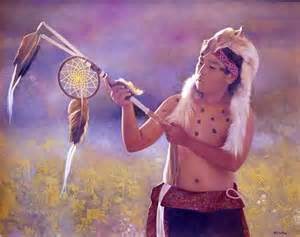 I can identify with the reluctance to fully submerge in the emotional waters. The wounded healer attitude is my first reaction to a difficult situation. First helping others and in the mean time suppressing our own feelings is not the healthiest way to cope.
I hope you feel okay now and the happiness will stay with you

Well nothing is written in stone with the cards, but I know better now what to look out for, in order to keep myself emotionally healthy, and happy. It helps immeasurably I think if you know yourself.

I used to be an emotional open book Ellen. Good way to get hurt. No regrets, but I'm wiser now! I try now not to suppress my feelings and thoughts, but avoid getting on to the emotional band wagon, especially with those who can not, or will not give you what you want or need.

When I was younger and more naive I used to have those unrealistic expectations. Not now, thank God!

I know people often say the best way to deal with your emotional self is to go help another person. There may be some truth in that, but I think there is also the risk of using others as a distraction to not deal with your own stuff. Hope the happy part of your dream is the one that sticks with you!

I agree Bev. You can't give away what you don't have yourself. Working in the helping profession I saw many trying to work out their own issues through others and projecting onto others. Not healthy at all.

If your stuck on the old pity pot it's a good Idea to help others.

Thank you, me too. Oh my my, that was a good dream! I only got sad when I realized it doesn't match my reality, but it sure matches my imagination! Lol :)

I often have trouble with the King of Cups. Is he staying distant from emotion, creating that separation and the self-fulfilling prophecy of not being able to love? Or is he maintaining a little bit of distance, so that he can better assess the emotions of himself and others, and act from a place of compassion and empathy, rather than pity and sympathy? A delicate balance...

You and me both Kerry. We all need to work through our grief and heart ache. I suppose we can 'help' another do this up to a point, not at the risk of getting drawn into someone else mess. As the old Polish proverb goes, " Not my circus, not my monkeys! "