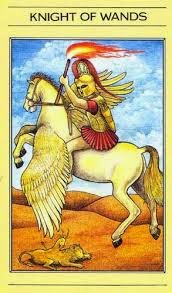 I want to apologize to my readers, as I had posted the wrong card October 16th, 2014. I'd meant to post the Knight of Swords, not this card! I'll blame it on my rather impulsive, restless Knight of Wands aspect of my personality! I was wondering why it felt off, and I was puzzled, drawing this card again.
As Alf the furry cat and pizza eatin' alien once said, "I kill me!"

The Knight of Wands is an explorer, and an adventurer. Restless, impulsive and full of ideas yes, but he lacks the innate nobility, strength, leadership, and larger than life personality the King of Wands possesses. This guy needs to be taken with a grain of salt, as he can be very alluring, exciting, and charming, however not the most reliable. He's always on an never ending quest, and might be a little bit of an adrenalin junkie, or addicted to being in a hyper-vigilant state. He is neither a follower nor a leader, not being the most responsible type, and he'd rather be unfettered to do his own thing, as he is easily bored, and does not want to have answer to anyone.

On the positive side, the Knight of Wands is extremely passionate, creative, imaginative and intuitive in nature, ready to take on the world.
Posted by Unknown at 5:09 PM

I suppose we all were too captured by the story of your brother to notice :D
Then again I guess a hero is all knights in one.
Hugs

Ha, yes, the Knight of Wands is the bad boy of the tarot court - reckless and irresponsible, yet also so alluring and full of passion ;) He's great for a day of making new starts, with lots of creative energy! Hope you've had that kind of day, Cath :)

Hope you're okay, Cath, as you haven't been about for a while. An autumn bug? ((Hugs))

Thank you for thinking of me. Yes I am very well. I should have dropped a note saying I was going away to Halifax for a few days. It was a little chaotic before hand as I wasn't sure how I was getting there. Car's on the fritz ( story of my life). Any way I will be back in the swing of things tomorrow if not later today. I have to work this morning. No bugs on me!!! LOL Hugs Xs to you!

I have done the same thing on my blog before, but as Ellen stated, we were all too moved by the story of your brother to even notice. :)
I could use some of this knight's energy today. The autumn weather sometimes invigorates me and other times makes me want to bury myself under a blanket. I think part of it is the approach of the holidays, which I'm not looking forward to. Perhaps I just need to see them as an adventure like the Knight of Wands would!

Brain farts I call them!
You an me both Kerry, one of those blanket over the head days for me. I went away and had to work this morning, now I'm pooped. I'll have a good sleep tonight. That will be my big adventure for tonight! :)