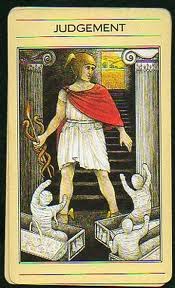 The Judgment card heralds a beginning, that emerges out of the past, and becoming one with the universal consciousness.
I feel I've had a life time in pursuit of universal consciousness. If I ask myself why, I'd have to say perhaps it has to do with my faith, that was imparted to me from my mother at an early age. But I always had an awareness of there being a universal force watching over my shoulder, that was greater than anything or anyone in the world or the universe.

In my young adulthood I began to acutely feel the impermanence of life, after having lost many loved ones to tragic death. We can begin loose our fear of death, because we have an increased understanding of it, through our own experiences. Or we can live in fear and doubt. I chose faith.

I began to feel that the earth was not really my true home, and this was not the end of the journey. I saw myself as a pilgrim, just passing through, and I still believe this to be true.

Judgement symbolizes release, liberation, fulfilment, healing and a new life. How grand is that?
We can see this card as being rewarded for efforts made, that can give us a deep sense of purpose, and meaning.

We can judge ourselves mercilessly, without ever the need of being judged by the Creator. Karma is the judge I believe, and the judge exists within ourselves. I do not believe in a merciless judge, but I do believe there is a day of reckoning in that we do reap the harvest of the seeds we have sown, in one way or another. We are held accountable in some way for what we have, or have not done in life, sooner or later it catches up with us. That said, it is no one's job to place judgement on another.

But the good news about The Judgement card is, we have the free will to choose, to forgive and forget, to do some soul searching, to be our true and very best selves, while we are passing through, on the way to universal consciousness. 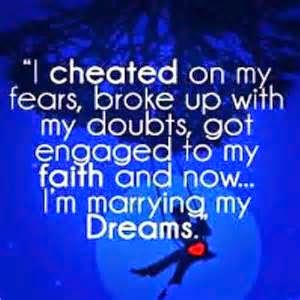 I don't believe in a merciless judge either but karma is an universal law I can live with. We have to live with the consequences of our actions and move from there. One day of reckoning sounds too final for me. That feels like some are left out and in my opinion everybody is included although for some it will take longer to wake up to the call of Judgement

Well I certainly really don't know Ellen, how we are held accountable and I guess I can only conjecture. I've always been of the belief there is hope for the hopeless. Regardless it's not for me to work out but the powers that be. We are all accountable, and that was my point.