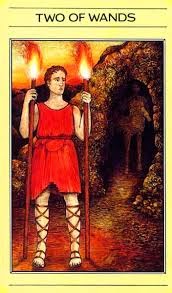 I love the Two of Wands in the Mythic Tarot because it speaks of courage, that is imparted to another, represented here by Chiron,  the centaur, half human, half horse, the wounded healer or the teacher. Jason has been told about the Golden Fleece and that he is a prince, and rightly needs to claim his inheritance to the throne.


The adventurer and the beginning of a creative vision is represented here in the Two of Wands and a goal that is believed in, though it is not clear as to how this goal will be achieved. This goal is full of creative potential, depending on the courage of this individual to face the unknown and to put their faith in the invisible creative power.

This is a wonderfully affirming card, spurring and inspiring the individual to come out of the cave so to speak, face the fear and to take hold of the new adventure and bring this new vision into fruition and concrete being.
Posted by Unknown at 9:19 AM

"face the fear" You can see by the facial expression of Jason this isn't easy. I realize that I often understand exactly how I should behave but doing so is a whole different story. My mind and my heart don't always keep up with eachother :D

Yes Ellen, I sure relate to your thoughts. Fear and guilt have long been my two nemesis, depending on the situation and circumstance. It's lessened a lot, but like the look on Jason's face, he looks like he's not real impressed with what's ahead! Hopefully he has numerous changes of underwear! Lol

Ha ha ha!!!
Ps I know these two nemeses far too well myself. They have become less big and frightening but they are still lurking in the dark corners of my mind