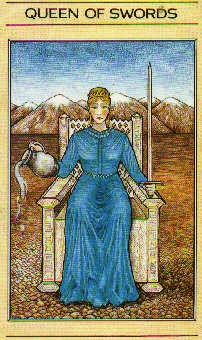 Today's card from the Minor Arcana, the Queen of Swords is a strong independent woman. In the Mythic Tarot the Queen is Atalanta who was abandoned but her father who was disappointed that he had no male heir. He left her on a hill, but she was rescued and nursed by a bear, sent by the moon-goddess Artemis- Hecate.


The Queen appears aloof and cool, but don't be fooled, she has a soft underbelly after experiencing  great losses, and many difficulties in her life. This Queen is very familiar with hard times and suffering, but continues to thrive, not just in spite of them, but because of these burdens she has had to bare, this has given her an inner strength.
She has a vehement sense of justice, and benevolently upholds and champions the rights of others, perhaps as a result of her own loss and brokenness.

Quick witted with a sharp tongue, she can cut to the quick, being very intelligent and passionate about her high ideals. Not willing to settle in love she can cut her nose off to spite her face because of this idealism, which in the extreme, is an expectation of perfectionism in others; an expectation that was placed upon herself as well at a young age.

The Queen is a woman possessing a strong sense of integrity and pride, but she is also lonely, and isolated as a result of these high ideals. She may be unconscious of her perfectionist expectations, however it does have a positive aspect, in that others are inspired by her, to improve upon themselves.

Being too idealistic prevents us from ever measuring up to a perfectionist ideal. It does not exist in reality, and is an image. This state occurs because this individual is fearful of being human, and leaves us vulnerable to being hurt.

Many of us have been hurt in early life or in the past, which manifests into our adult life, especially if we lack self-awareness, and choose not seek help to resolve these issues. Serious problems arise in our relationships with others, as a result of clinging to an unmovable faith in high ideals, leading to an addiction perfectionism.

Beautiful painting. I like the composition in this triangle
When I read this post I am not surprised I can identify with this queen the most. I have had so many similar experiences. And I cannot help but wonder if you had too because this was so well written from your heart

Thank you very much Ellen. This painting is one out of sixteen from Women Who Run With The Wolves series I did a few years back.
Yes, I also identify with The Queen of Swords the most. And yes your perceptions are correct and you've read between the lines :) I have had many losses and difficulties I've had to overcome in my personal life. Thank you for your kind comments <3