Page of Wands - Having Something To Look Forward To 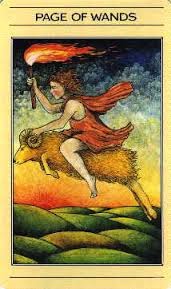 The Page of Wands is the perfect card for me to draw today. The element of fire is representing the creative stirrings with feelings of unease and restlessness. Oh ya I'm feelin' it! Bring it on!

It's another day of snow, after getting walloped by yet another storm, 30-40 cm on top of the 30-40 cm that was already down from the last blast. Some folks actually got 80 cms! It's been said that this has been one of the most intense Winter's in 20 years. Needless to say, it is really getting to people, and here in Nova Scotia we've all gone a little doolally with seemingly no Spring in site. But this card gives hope in knowing Spring is coming, and it's just a blip, in relation to the great snow globe of life! All these weather events are relative. Actually what concerns me more than anything is climate change, which may be the new normal. I am a hopeful person, but this serious problem leaves one feeling a little dubious about the future.

Wands are full of growth, energy and action. So, I swept the floor, rearranged some furniture, and re-potted a few plants and of course as always blogged. It's not exactly going after the Golden Fleece, but considering my present level of ambition right now, it's as good as it gets today! No snow shoveling until tomorrow, as I just can't face it again right now. If we get the next storm on Saturday, they are calling for, which might be a snow/rain event, it will make for a beautiful mess and three storms in one week.

As you can see, my preoccupation today is with this Winter weather, and Spring arriving in two days. It's not what I was expecting. So close yet so far away! But this card heralds good news, that is on it's way! Right now it is a ' hurry up and wait' scenario, but the snow can't last forever!

The ram that this Page of Wands (Phrixus) is riding, is in fact the Golden Fleece, when it was alive. Phrixus is escaping. The ram was sent to rescue him, and his sister Helle. Phrixus was to be sacrificed to Zeus that was the curse put upon him by the phantom woman Nephele, who had married King Athamas,  Phrixus and Helle's father. Zeus was having no part of this plot, sending the ram to rescue Phrixus and his sister, the same Golden Fleece Jason, and his Argonauts were in pursuit of finding. Phrixus in turn gave the ram to Zeus as a sacrifice for having been recused.

Phrixus looks like he is in a desperate state to get moving, and so he should be, because his life depends on it. He's already lost his sister, whom he tried to lift onto the ram when escaping, but sadly she fell into the sea, and perished.

When we are wanting something badly enough, we too may be in a desperate state. Perhaps because we are afraid that we might not make it, and fear failure. Our lives may or may not depend on it, but we may feel that our happiness does. Creative energy moves us toward change, gives us the ability to move ahead, and  overcome.

Not unlike Phrixus, we have no way to predict future outcomes or what is ahead. To be sure, there will be trials, difficulties, and sacrifices made, challenging us to grow. These will only increase our confidence. Regardless of our circumstance, it is a good thing to be motivated and inspired to have a goal, and live the life you love, and deserve. This is transformation.

I have heard it said, the definition of an alcoholic is someone who has to have something to look forward to. As a recovering alcoholic, I think this may be true, and makes sense to me. I must say, I am really looking forward to the year ahead, to Spring, and it can't come fast enough. I won't stick my head in the snow bank. 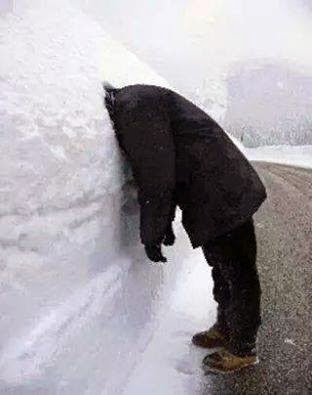 Maybe your neighbor will give you a hand again.:)
I do hope your surroundings will soon be as colorful as this card
Hugs

Thank you Ellen.
I'm certain some one will be round, if not today, tomorrow. I'm okay. Halifax the major city of Nova Scotia got 75 cm and the city is one heck of a mess, so I figure we have made out okay all things considered. We were supposed to get together with our friends this weekend away. But that isn't likely to happen now. But better safe than sorry.
A lot of people have been stranded on the highways and many accidents.

Hugs to you Ellen <3