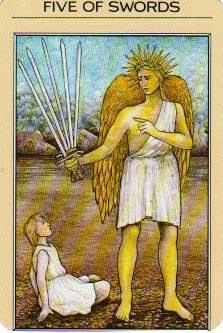 I write and think about acceptance a lot. I expect because it is one of the aspects of life that I have to face, some times on a daily basis and generally speaking. Life is difficult but acceptance makes it much easier. Along with this having a grateful attitude direct output of this increased happiness.

As of late my thoughts have been about family, as I have recently and over the past years been in touch with many relatives I never knew existed, due to family estrangements, distance and even secrets. I know this is a common issue in most families due to past events, many that are above and beyond our control. There is no such thing as a perfect family and life is far from perfect.

In the Mythic Tarot, the Five of Swords portrays Oretes facing the God Apollo, who has informed Oretes  he is obliged to accept his fate in having to avenge his father's death, at the hands of his mother. He is faced with having to accept overwhelming limitations of his family inheritance.

We cannot change our family history, and it can seem almost impossible for some of us to resign  ourselves to what has happened to our families, and how it has affected us, whether it be physically, emotionally or psychologically. Granted, it is not easy, and much of the time there is no resolution. We simply must accept that the only resolution is to accept that there is not going to be a resolution that we want.

We can not change anyone but ourselves. Acceptance of ourselves and circumstances is directly proportional to our happiness and peace of mind. However, we do have a choice to accept, not out of obligation, but because we want to and are willing. Even a willingness to be willing, makes all the difference.

Our burdens are much lighter and easier to bare, if we embrace them, but are heavy and overwhelming if we drag them; wearing the weight of the world, instead of wearing the world as a loose garment. 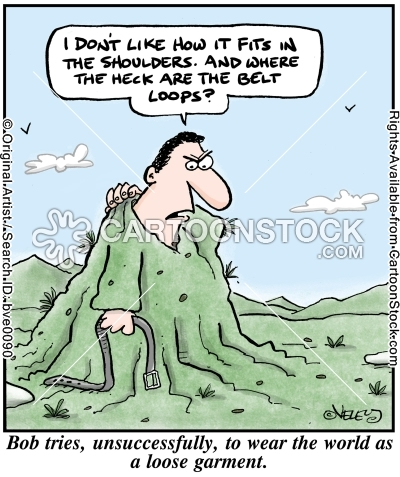 There is this saying which starts with: God, grant me the serenity to accept the things I cannot change. I agree that accepting and gratitude is uplifting for the spirit. And I think the older I get the more easy it becomes to accept a difficult situation.

I am very familiar with this prayer Ellen. It's both powerful and strengthening. And the last part is " and the wisdom to know the difference. " It is what I live by. I am a recovering alcoholic and have been clean and sober 20 years now as a member of AA. Thank you so much for your comment Ellen.

What a wonderful achievement Catherine!!!
Hugs