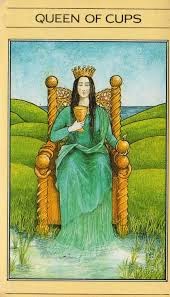 The first and favourite book I read as a child, was Lewis Carroll's, Alice In Wonderland.
Yesterday with two of my favourite little friends I watched Tim Burton's 2010 film, that depicts Alice as an adult. It was very well done, and once again I was enchanted by the story.

In the Lewis Carroll book, one of the most vivid characters I remember that I was disturbed by and fascinated with, was the Red Queen of Hearts. Her personality was mean, cruel, audacious and ridiculous. She was a nasty piece of work; full of resentment, jealousy, a megalomaniac and really has a predatory  nature. The mean Red Queen is like a  " natural predator of the psyche. "

There is a quote from the Red Queen when she said. " It is better to be feared than loved.” She was the exact opposite of the Queen of Cups of the Tarot, who is benevolent, intuitive and loving.  Her depth of feeling and imagination  is really unparallelled in many ways, to any other card, in that she drinks deeply from the cup of life, relying on her emotion before her intellect. Her emotion and sexuality are intense having water and the Zodiac sign of Scorpio, being the major influence. The Queen of Cups follows her gut instincts and intuition and her imagination is vivid, resulting in the expression of her strong creative spirit.