Ten of Wands - What's The Next Big Thing? 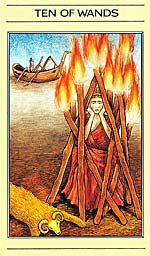 Geez, it almost pains me to look at this card. It's not as negative or overwhelming as it appears, and isn't what it seems, but it is a situation for concern.

Jason has his Golden Fleece, and his great vessel, the Argo, is worse for wear after the long and intrepid voyage. Now his fellow Argonauts seem nowhere to be found. Perhaps they're burnt out, and gone back to their ordinary lives, having grown wearisome of Jason, and his next big adventure. Jason appears to be almost imprisoned, and overwhelmed by his own creative thought, surrounded by the ten blazing wands. The Golden Fleece appears to be discarded on the ground and all but forgotten.

At the beginning of the quest, Jason's expectations were extremely high. He was full of excitement, expectation. with a thrilling and contagious sense of great adventure. He'd been buoyed up by his mates, who believed in him, and that he'd be victorious. He was THE MAN!

The triumphant victory of obtaining the Golden Fleece and overcoming everything else along the way has left Jason feeling that it is all rather anti-climatic  He is no doubt thinking to himself, ok what now? What's the next big thing? It that all there is?
This kind of thinking is a self-inflicted pressure we can impose upon ourselves when we achieve our goals,  have found ourselves the center of attention, with people singing our praises. Being in this state of hyper-vigilance, and an adrenaline rush, is addictive. We find we are always looking for the next bigger and better thing.This state of hyper-vigilance can be very exhausting, for yourself, and for others.

There might be feeling of boredom, when in actual fact, you might find that boredom is the opportunity to simply live life on life's terms. Finding a deep contentment and serenity that extends it's hand to us, if we can accept it, is what I believe to be, one of the best secrets to happiness.
Posted by Unknown at 3:55 PM