Two of Wands - Are You A Conscious Choice Maker? 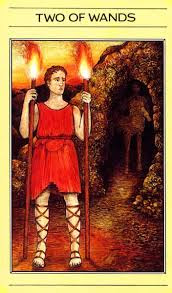 Here we see Chiron the healer and teacher in the cave, well hidden from view. Jason stands with two burning wands held on either side. Jason has left his more base behaviours behind thanks to Chiron, and come out into the light on his own to face the world, to decide what direction he will take.

Behaviour that is part of our the human nature we all possess, often referred to as being our monkey mind, that behaves according to a fight or flight reaction, is instinctual, and somewhat opposed to the intellectual or intuitive and moral direction. But we all have choices to make in spite of our basic instincts.

We all can find ourselves in situations where humans are behaving badly, my mother use to call it "cuttin' up your didoes," it is displaying some kind of foolish and destructive antics in other words. This saying is of unknown origin, but related to the Greek legend of Dido, who committed suicide after she'd been abandoned by her husband. Bad behaviour stems from deep hurt of some kind. The bad behaviour can become so convoluted, that most of us have a difficult time feeling much compassion or understanding for another with whom we just want to get the heck away from, or we want retaliate with similar reactive behaviour.

Christmas seems to bring out the worst or the best in folks, being a time when emotions are often close to the surface. Many are of us are stressed, overtired, overwhelmed, and over spent. We can be depressed by unrealistic expectations never fulfilled, and wound up tight as a drum. Someone is sure to get their underwear in a knot, and then next thing you know, there's a big blow up.

Many adults I know that grew up in alcoholic homes, can recall how the Christmas tree often got fired out the door, and onto the street. Fortunately this is not one of my unpleasant memories.

We have a choice how we respond to someone else's bad behaviour when they are cuttin' up their didoes! We can react in kind to their inappropriate actions, which only escalates matters, or we can extend a hand of understanding and kindness.

This was my experience Christmas Day with another behaving badly. I offered understanding, and a big hug. I was then was shown tears and appreciation for doing so. It was an important lesson, for me mostly, on "becoming a conscious choice-maker."

"By becoming a conscious choice-maker, you begin to generate actions that are evolutionary for you and for those that are around you. And that’s all you need to do." ~ Deepak Chopra

That is a difficult one.. My eldest was wronged recently and I can only feel anger towards those people who treated her this way. it is hard to let go of these feelings although I know they won't solve a thing

Personally I think there is nothing wrong with feeling anger with this kind of behaviour. It's unjust! The problem comes when I react to it in negative ways.

You are sure right Ellen, it is a hard one, absolutely nothing easy about it.
This woman particular woman has made such racist comments that left me so shocked, and I did speak my mind in the past. But it's always something with her.
Truthfully I extended a moment of kindness to her mostly for me to help me cope with her behaviour during what was supposed to be a Christmas gathering at my dear friends. They are sister-in-laws. You know peace, love and joy was to be celebrated!

It really surprised me that she broke down in tears. That said I avoid people like this wherever and whenever possible. She will never be my "friend", but she need not be my enemy either.

But this is where the rubber meets the road, as there is no virtue found in loving those that are easy to love, as it's said the hypocrites do this, and forgiveness is for us, not for them.

May those who hurt your daughter grow large warts on their necks! ;)