The Sun - Is The Sun Indifferent?

I can't remember when I last drew The Sun for my daily draw. It's uplifting, hopeful, positive, and a very promising card, on this gray overcast day here in Nova Scotia.

Recently I've been feeling inundated with the media hype about Donald Trump. I'm really so sick of seeing his foolish face, and all of his negative racist pronouncements.

This morning I heard some one say, good people need to speak out against this racism and injustice. I agree. I took this point to heart, though many of us might be think if we ignore Trump, he'll just go away. I'm tempted to think the same myself. Then I remembered, and reflected on what Eli Weiss said about indifference.


The Sun is the antithesis of indifference. It's the life force, the power of consciousness to dispel darkness with affirming purpose, foresight, and a faith in the striving of the human spirit. 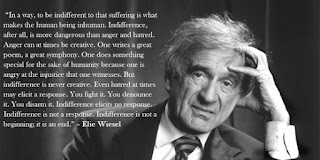 After the horror of WOII I say: Never again. For such complicated issues as terrorism there are never easy solutions like Trump suggests

I only wished we'd have learned the lessons from the world wars, unfortunately war is an ongoing scenario. Trump is a dangerous simpleton.