The Devil Meets The Wolf Woman 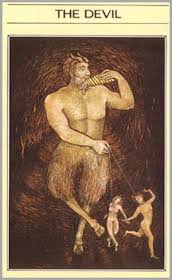 This morning I drew The Devil card. I have come to think of, and respond differently to this card. I no longer have the left over religious hang-up and misconception about this mythic figure. Though fortunately I never grew up with the so called "fear of the devil". I am not saying I don't believe there are spiritual dark forces  that can enter our lives in the form of bondage, but these don't have to control us, with a faith in the God of our understanding, a Higher Power, or a greater good in the Universe that is stronger than dark forces..

This card embodies the Greek Mythic god Pan. The impish trickster, rather like a misbehaving youth. He symbolizes the state of being wild, fertile, untamed, half man and half goat. He is not evil, dwells in a cave, and in a inaccessible realm of the unconscious.

I think Pan has much in common with the Wolf Woman, La Loba, the Wild Woman, half woman and half wolf, as she too is very much a wild one, untamed in nature, and in the natural state. She dwells in a den living by instinct and intuition.

On the eve of Summer Solstice is it fitting that I think of Wolf Woman. 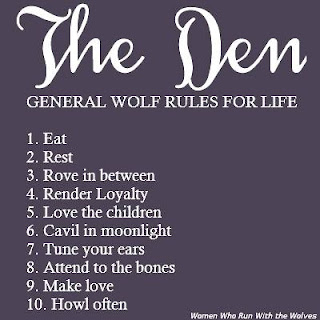 I'v recently drawn Pan (Tarot of the Sidhe) too and it made me think about how women of our age are taught to be good girls and to suppress our sensuality and sexuality. Of course times have changed and we are supposed to be liberated but the damage done when we when were little girls is deeply ingrained and difficult to let go. So this card is for me also about embracing my wild side and howl to the moon.!!
Today is the Summer Solstice and it is pouring outside and so cold! :(

Definitely Ellen the good girl premise still permeates through out society. Not sure what the word liberation means any more, or if I ever did in that I think in many ways it's all media hype. When you look around it's hard to figure out. But sure as hell doesn't mean we ever give up fighting for freedom from oppression, discrimination, violence, sexism and misogyny which exist everywhere against everyone. It's all the same fight.

It's over cast here threatening to rain and cold here also. See you're not alone! <3

A little bit of wildness is good for the soul. :)
I like your new photo - lovely!
I'm sending you and Ellen some heat. It's been hovering around 100F here.

Thanks Bev.
Oh yes please. Some folks hear have actually taken
to putting a wood fire on! We had an absolute down pour yesterday 55 mm. Some local flooding in town where some roads were closed.