Ten of Swords - How The Light Gets In 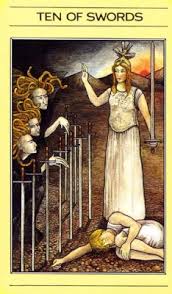 Here we see Athene the goddess of Justice. She reflects wise judgement, clarity of vision, and the integration of both the light and dark. With her owl always close by or perched on her shoulder, represents the ability to see and hunt in the dark. Athene is emphatically telling the three Furies enough is enough. Oretes is unconscious on the ground, seemingly defeated and spent under a darkened, blackened sky, with the rising of the sun behind the mountain range in the distance.

I remember many years ago seeing Edward Gorey's book, I can't think of the title, but I do recall very vividly one of his illustrations like so many of them, that are a full of dark humour. I think perhaps it might have been in The Inanimate Tragedy. This one particular illustration comes to mind today after drawing the Ten of Swords.


The Ten of Swords in the Rider Waite Deck is really dark with a poor bastard dead in the water, having been impaled in the back by those ten swords, and he really looks like he's beyond hope.

None of us get through life without experiencing death, destruction, distraction and maybe even debauchery of some sort.

The Ten of Swords is a card that appears initially a card of despair and hopelessness. It isn't a bleak as it might seem. It is a card of endings, but not without pain, and some suffering. Ya I know that sucks, but as Leonard Cohen says in the lyrics of his song Anthem, "There is a crack in everything, that's how the light gets in." This statement is one of hope, in knowing there is no such thing as perfection, and this is a good thing. Things may end, but then they also will begin again. One door closes, another opens. There is darkness, but there is light, hope and love.

This card today speaks loudly,  poignantly, and a little painfully to me today. I really kind of wished it didn't, cause it hurts a little. But for me, it's necessary to embrace pain, live life on life's terms, and it's important for me to have a good sense of humour, even if it is a little dark by times.

Oh sure, I could run away, drive my self to distraction through a variety of means, addiction, perfectionism, and all the other 'isms, but I have already done this for a good part of my life. I know it gets me nowhere fast, and really in the long run, I might as well be one of those tragic inanimate objects, like in Edward Gorey's illustration, because it makes me dead to my feelings, which in the end would only make me less of a human being. This is not freedom.
There are many ways to die, not just physical death. Spiritual death in my opinion is worse than physical death. I choose the hope, light and love of a spiritual life, though I may physically die in the imperfect darkness.

Beautiful song! I like the hoarseness in his voice so much
"There is a crack in everything, that's how the light gets in." Lets be grateful for our many cracks!

Ellen I've been listening to Leonard like so many since I hit puberty. He's truly a poet's poet. He admits he can't sing, but thousands upon thousands don't care. Canadians love him and I am certain he is loved world wide. This song for me is one of my very favourites.
He spent years in a Buddhist, monastery, lost all his money and then made a huge comeback in his 70s! I still think he is sexy! Lol.