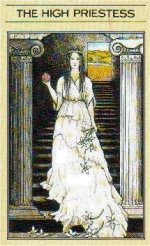 We have all felt lost, hurt, confused, bewildered, fearful, and even like we have been taken hostage, much the way Persephone felt when she was abducted by Hades, to whom she was bound forever, and taken to the Underworld.

Persephone The High Priestess, Queen of the inner hidden world, keeper of mysterious secrets, reveals herself to us in dreams, and in our unconscious.

Persephone's Earth Mother Demeter, searched desperately for her until finally she punished the earth casting a spell where everything was plunged into snow, cold and darkness, and nothing grew from the earth.

The past few weeks I felt myself glimpsing into that dark world, where Persephone resides three months out of the year. Through a message of the unconscious in a dream, the Ten of Swords and a synchronicity of events, my intuition was working overtime, trying to get the message across to me. As usual, I didn't fully understand until the whole thing was over, but I am feeling much better, and come back to myself with a deeper sense of trusting my intuition, wiser and stronger than ever.

Persephone reminds us that there is a constant coming and going in the depths of our souls, that allows and causes us to grow when we do the shadow work. The High Priestess urges us to pay attention to our feelings, intuition, and to the night-world of dreams, as this is where the natural law is revealed.

In Greek Myth Persephone and her Mother Demeter, are embodied in this mythic story. In Roman myth we find the same story with Proserpina and her Mother Hera.

I heard the beautiful song Proserpina this week, written by the late great Kate McGarrigle which was the last song she wrote before her death. It is only fitting that I post this, sung by her loving daughter, Martha Wainwright. It is both very beautiful, moving and poignant.

The story of Demeter and Proserpina moves me and this song had brought tears to my eyes. it words so beautiful what grief is:
"I shall turn every field into stone
Where I walk crying alone"
I am "going to mama" this weekend and but this Proserpina has changed a lot, so I I will be loving and gentle to her and try not to dig deep for what I know I cannot find anymore

Thank you Ellen for sharing your thoughts. The actual film of just Martha singing this is even moving moving, because she did this film singing her mother's song after she had died. You see the emotion on her face and deep within her soul. I was an emotional puddle after watching it.
Big hugs to you and have a loving visit with your mama <3

I can imagine how you've felt if you've watched this version
https://www.youtube.com/watch?v=FZFxQSgWinc
P.S. love your new picture, you look great!

Whoa! That one was more emotional that the one I first watched! Proserpina overload today! LOL