Page of Swords - Who's Really The Worst Handyman? 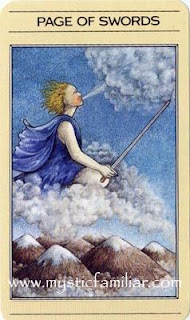 This morning at 9 o'clock my neighbour offered to help me with an ongoing plumbing problem I've had. This problem was created from the mess a paid contractor had made some time ago. When this contractor did most of the work, which I thought had been completed properly, it wasn't long it'd become a big nightmare, after paying this so called professional worker, he'd left the job half done, and me with a real big headache. In my estimation he was anything but professional, not even a good handyman. He'd promised to return to finish remaining work I needed completed, but as soon as he got his money, he was never to be seen again.

The Page of Swords that I just drew shows me that this is my young neighbour, who is a character, and some one with such a good heart, in the right place, with lots of energy. There's lots I could say about him, but I'll tell you this. He's a kind of celebrity of sorts round these parts, and every one knows him. Most of all he's got guts, brains, a great sense of humour, a big heart, with a personality to match. You can't help but love him.. He's one of those unique individuals who's always full of surprises and the salt of the earth. What you see, is what you get. Like the Page of Swords, that relays the message, to be like Tex, your authentic self.

A few years back his name had been submitted to the reality TV show, on the Discovery channel called Canada's Worst Handyman. At the end of the series, he'd come in second. And now I know why. He fixed my serious plumbing problem, and in my eyes today he is not only Canada's best handyman, not the worst. He's actually hero to me.

Thank you Tex. You've made my life a whole lot easier and happier, and I can hardly wait to hop into the tub, and every time I turn on my water taps, I'll think of you!

What a lovely story. it is good to have people like him nearby. Somehow they radiate such a loving energy
Enjoy your baths my friend!!

Thank you Ellen. It sure makes me happy to share this story. I wanted to pay him, but nope he wouldn't have it, and said that's what neighbours are for. I know I'll sure be paying it forward.

The world needs more like Tex. He made me feel like I was the most blessed person, and I am in so many ways I know. I'm proud to call him and his wife friends.