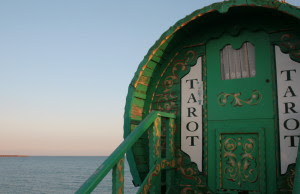 Do any of you remember Miss Cleo? She use to be on late night TV. She was one of the worst so called Tarot reading psychics that really got on my nerves, because I knew this was nothing but a scam..  I guess I watched it every now and again when I couldn't sleep. I found it to be pretty much bad theatre it was so ridiculous and she was so over the top.

This was many years before I 'd ever even been introduced to Tarot, but it wasn't  rocket science to figure out it was all fake, and unfortunately there were many that were duped before the show finally went off the airwaves, never to be seen again.

It's people like Miss Cleo or whatever her name was, she had many aliases, that give those authentic and honest individuals who are ethically study metaphysical matters, a really bad rep, which contributes to the kind of destructive myths and misconceptions surrounding Tarot readers, that can be very damaging.

And so it's a good thing to demystify, and deconstruct these myths and untruths. It's also good advice to use  discernment in choosing your own Tarot reader, before deciding to go ahead and have a reading done, because there are many in this world who's intentions do not reflect a professional integrity.


The personalities of Tarot card readers are as varied as a deck of Tarot cards. Most that I have met are honest, regular and exceptional folk, empathetic, creative, intuitive, perceptive and intelligent individuals. They have a good sense of humour and are thick skinned philosophers, who love people, and are humble.

Today I learned about one such Tarot reader who wrote an article for the New York Times by the name of Jessa Crispin, She shares her story of how she became a Tarot reader, and I really appreciated her candid, entertaining and very human introduction into the world of Tarot.

We all have a story to tell whether it be our life story or how we became Tarot readers. What's your story?
Posted by Unknown at 8:42 PM

My first experience with tarot was using the deck for simple fortunetelling when I was about 15 years old. You can imagine what my readings where all about :D
Year later after having studied the runes I picked up a deck of cards and tried to memorize 78 meanings. I guess I can say I've come a long way since then :)

Thank you for sharing your experience Ellen. I was always drawn to learning about Tarot, but never did as a young adult, because I thought it was contrary to my religious beliefs. Am I glad I found out otherwise!

Haaa yes we all think we can memorize the meanings of all those 78 cards. Crap I can hardly remember what I forgot, because I forget what I was supposed to remember! lol. I really started to get the bug when a close friend was doing readings, and she'd do readings for me. Not too long afterward, I made up my mind to learn. Whoa glad that big initial learning curve is over, cause I was inundating myself with information overload. But I couldn't seem to get enough. I loved learning about Tarot and still do.

Here's a little story about my first exposure to Tarot when I was fifteen. I learned about socks! Ahhuh.

Loved the sock story! I wonder which card gave you away back then :)

Haaa haaa :) She must have seen I had a sock fetish!