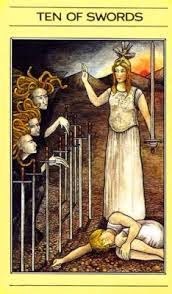 The Minor Arcana card I drew this morning, the Ten of Sword's, is a very appropriate one for this beautiful and glorious Spring Easter Day.

Upon first looking at this card it looks ominous as depicted in most renditions. It is a card of perfect desolation, representing an apparent hopeless ending. The darkest hour is just before dawn, but there is major change and transformation on the way.

In fact, it speaks of triumph, conquest and resurrection, in spite of the harrowing and fearful imagery of extreme danger, bloodshed and fear. The man who lies limp and defeated has been tortured and seemingly clings to life by a thread. He is a Christ like figure. However upon closer examination, the emphasis is actually on overcoming, and triumphing over defeat, and on the resurrection of life and rebirth.

In the distance, the sun is slowly rising in the horizon, heralding a new beginning in the midst of the defeat. The sun is life giving.
Once the crisis is over, the sun shines again. We have been freed of some deep rooted wound and burden within ourselves, that has been released and redeemed but our suffering. It is the final conclusion and the end of a difficult situation. A new life begins, and the sun shines brightly upon us. 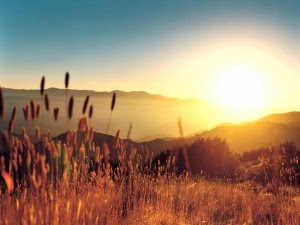