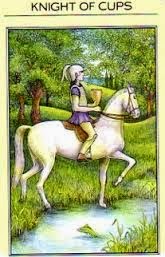 Romanticism may seem foolish to a world that appears jaded and cynical in it's perspective, and some might possibly question, if such a thing even exists today. The Knight of Cups is seated on a elegant white horse, carries a golden cup much like the Holy Grail, and is crossing  a stream teaming with fish and life. As mentioned in previous posts, the Suit of Cups are connected with the emotion, relationships, friendship and romance. Also associated with the element of water, and the water signs, Cancer, Scorpio and Pisces. The suit can also refer to those with an artistic temperament.

The Knight of Cups is an earnest, positive, persuasive, and an attractive individual, who is on a quest, perhaps a quest that is romantic or of a spiritual nature. The individual has a vision of what life should look like in the mind's eye, and in their heart of hearts.

This card in the Minor Arcana, I am personally very fond and identify with, because this is a portrayal of an individual on a mission to find what it is he seeks in life. Some what of a heroic figure, he believes in holy love conjoined with earthly love, in beauty and in truth. Without this kind of individual, the world would be bleak, colourless, and full of despair.

Some can find many loves in life, either in a committed and meaningful relationship with another, or we find a passion for something that becomes our vocation, that gives us another purpose in life. The fish is a spiritual symbol.

I have always been a great admirer of Pre-Raphealite art work, because it is full of romanticism, and it tells a story. The painting entitled, The Lady of Shallot, by John William Waterhouse, though he was a Neo-Classic painter, he was influenced by many of the Pre-Raphealites, and romantic poets. His subject matter was often based on Mythology.

The story behind the painting depicts Lord Tennyson's poem, that is tragic, but beautiful, none the less. Loreena McKennit put Tennyson's poem to music. 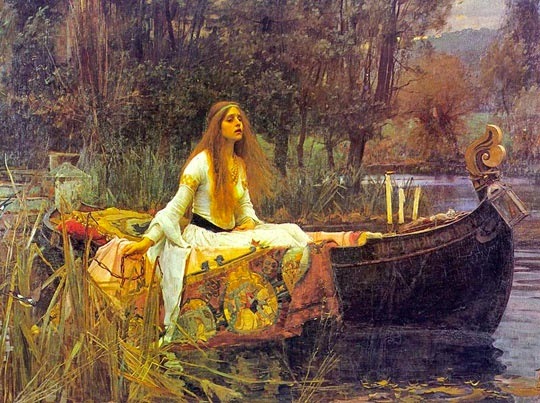 Romanticism inspires the imagination and feeds the soul. Artists are often moved to produce great art because of romanticism, as it we longingly aspire to be transported to an ethereal and spiritual world. I believe the world needs to experience romanticism that deepens, nurtures the spirit, and this can be found not only in our imagination but in love, beauty and in truth. This is the message of the Knight of Cups.