Eight of Cups - Letting Go of the Beavers 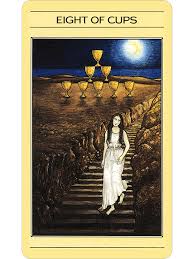 Change, escape and disappointment are all reflected in the Eight of Cups.

Psyche is obviously on her way down to the Underworld not knowing if she'll ever return, because she does know many that don't. It appears to be a hopeless and dark journey.

As with so many cards depicted in the Mythic Tarot and situations in life, initially feel and seem like a calamitous scenario with no apparent resolution, but there is always both positive and negative in every card..
Psyche accepts her situation in spite of the expecting the worse outcome. But because of her accepting attitude things do change for her regardless. The situation may not be ideal but the very best that can be expected, is to let go of the outcome. Not being able to let go of the outcome of our problems is like a beaver that continuously gnaws at a tree, and we're the tree. Eventually it falls one way or another or until it dies.

Today I was visited by Ducks Unlimited who maintain the wetland and take care of the dykes in the tidal marsh, that I look out on from my house.  This has recently meant removing the beavers and their habitat. It saddened me to know they had been trapping the beavers and today had come to destroy the beaver's habitat with a big excavator, in order to prevent the beavers from doing any more damage to my trees or building more dams blocking the water way and the ravine the drains into the marsh. 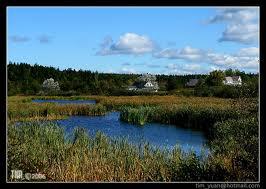 I see this recent development as being a kind of life metaphor, in that it reminds me, sometimes the only escape is to have a willingness to be sad and disappointed in order to make way for change.

Sometimes in life the only resolution might be understanding that there is no resolution, and that's acceptance. This can be the most positive lesson and I think really, is the secret to life.

Imagine the story if Psyche sat on the top of the stairs and stayed there waiting for.... whatever would keep her form having to descend. :)

Lol now that's an interesting thought. Probably a big beaver would come up and escort her!