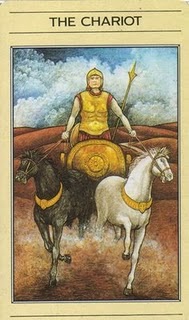 The card of the day for me, is The Chariot.  This card is symbolic of war, battle, conflict and struggle, which may seem initially to be a negative thing, but if we allow ourselves, this struggle and conflict can give us strength of character, and great personal transformation, depending on our attitude. I have found this to be very much  the case personally. I have witnessed this inner strength, and courage in others, who have been, and are warriors.
Although it is necessary to face these conflicts and contradictions within ourselves, and cannot be avoided,  I have never found this to be easy, but it is all part of growing up, even becoming and adult!.
Resentment and aggression  are luxuries I can  no longer afford. I stopped carrying around a little gunny sack full of grudges toward others. I have learned to forgive others and myself.

The Chariot is the seventh card among  the 22  Major Arcana. The astrological sign Cancer and the Moon are linked with this card of conflicting animal urges and the inner instincts that can threaten to run away with us, if we do not learn to live in balance and harmony. This does not mean that we should repress our feelings, otherwise we loose our personal power, and ability to not just survive in spite of ourselves, but to thrive because of our selves, in finding our way, traveling along on the road of life.
Harnessing and balancing human nature, being pulled in opposing directions; will and action, the two horses, one black, one white symbolize this struggle that takes place within the human psyche, as we make daily decisions in our lives.


Ares, the God of War, is seen in bronze helmet and bronze armor over a blood-red tunic as he drives his war chariot. He wears a shield at his hip, and at his side is a large spear. He holds the reins of two horses, one black and one white, as they pull in opposite directions before him. The landscape is reddish and desert-like as a storm approaches.