The Star - Don't Let The Bastards Grind You Down

The quote that I often hear repeated "Don't let the bastards grind you down" is a good way to describe this Major Arcana card, The Star. Here we see hope and inspiration embodied in the image of Pandora who in myth opened the chest which Zeus maliciously gave to mankind and now Pandora has released all the Spites.

This card embodies the experience of hope, meaning and faith giving this promise in the midst of difficulties.

I thought the above quote was attributed to Viktor Frankl, who survived the Nazi concentration camp and wrote Man's Search For Meaning. I think he would have certainly identified with this outlook when he said " “When we are no longer able to change a situation, we are challenged to change ourselves.”

These quotes I believe describe what it means to let go.

"Wear the world as a loose garment, which touches us in a few places and there lightly” – St. Francis of Assisi

This is what I have found I've had to do throughout so many times throughout my life and it has become my own personal philosophy and perspective towards life in general. I've learned to wear the world as a loose garment and I've had to change myself and my attitude toward the situations I couldn't change.

It sounds simple enough, but it isn't. It's an attitude and skill I've had to practice and continue to make it a life long habit. For me it's about learning to detach with love. Before recovery I was attached to just about everything; my hyper-vigilance and waiting for the other shoe to drop, attached to the past and the future, and attached to my misery and all that it entailed.

I'm so very grateful  every day, that I was introduced to the philosophy of letting go and that star of Hope. 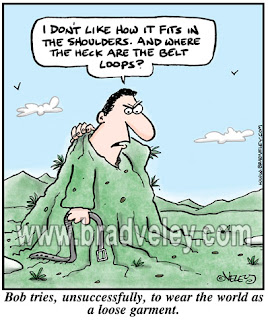 Thank you so much Ellen for your comment. It has touched my heart.. As a Canadian and having a grandmother from the Netherlands, I feel a special bond. <3