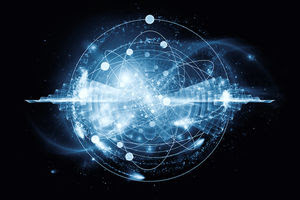 I'm sure no physicist or a new-ager, but I am an old-ager! ;)
I believe in the power of our often untapped ancient traditional mysteries of intuition and science.

Being that the Universe is made of high energy particles, and after reading a great explanation today about how online Tarot readings work, and learning the meaning of what quantum physics calls 'entanglement,' this made a whole lot of sense to me.

I always knew this to be true on an intuitive and rational level, but never heard it explained scientifically. It's a kind of cause and affect, where when one bit of energy moves, affecting another or what Troi describes it best in her own words; "where a disturbance or change in particles in one place affects particles in another." It's all about your electrons and photons mixing it up and gettin' jiggy with it! Or entangled if you prefer.

The notion that two entangled particles can instantly affect and communicate with one another, regardless of their distance, has been scientifically proven to work by quantum physics.

The Tarot reader and blogger Troi, compared people to being broadcasters and receivers with our own unique individual energy frequency which constantly is emanating to and from one another. When we hone our focus on some one, we are then connected regardless of our geographical distances. That's the simple lay explanation.

I would probably quantify this by saying it presupposes that we have a faith either in a power greater than ourselves or a belief in science, or a belief in both. I am not of the opinion that they are contrary to one another, but complimentary.

I like this simple short video explanation of quantum physics and the entanglement connection.

Isn't it marvelous how much of the old wisdom is now proven by science! We're all connected my dear friend. (moving some positive particles your way :) )

Ahhaa! You're right Ellen SO neat!
Positive particles right back to you sweet friend! <3

Oh and I meant to add, I found it interesting to find out that Einstein, despite the creative guy he was, said it wasn't possible, but quantum physics proved him wrong!