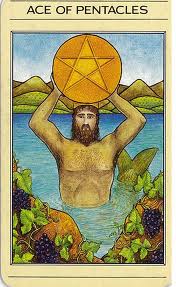 According to Greek mythology Poseidon was a god to be feared, though he did have his positive side in spite of his changeable and unpredictable moody nature. He could calm the rough waters and then create turbulent storms and earthquakes. You didn't want to get on his bad side. He loved the ladies and his horses.

Regardless of the fact that the Ace of Pentacles is a Minor Arcana card, it is a force to be reckoned with. This card epitomizes a raw and powerful energy at it's best I think, but could be the exact opposite at it's worst. I relate to Poseidon mainly because of the water he inhabited, sitting at the bottom of the ocean.
His paternal heritage was that of being the overseer of the all the waters and controlled the surface of the earth. He makes things happen in a powerful way. He is the fertility god and husband of the great Earth Mother and lord of the physical universe.

Today, drawing this card I am thinking about my late mother, being her Birthday, February 4th. She was a air sign and and very much an Aquarius. As a Gemini, also an air sign we were very close. We shared many of the same qualities I think, independence, indecisive, stubbornness, a good communicator, a deep thinker, intelligent and liked to help others.

Like the Ace of Pentacles, my mother made things happen in her life and in the life of others. I think when I was younger I was rather unaware of just how much energy and strength of character she actually had to accomplish what she did, in spite of all the struggles and obstacles in her path. She stepped over them and never let this impede her. She very much embodied many of the strong, positive traits and characteristics of Poseidon. Like Poseidon she was fiercely protective and cared so much for her children. I know I'd never be in the position I am in, if it wasn't for her loving care and strength of character. My mother made me a better person, brought me happiness and taught me so many invaluable lessons that I am so grateful for everyday.

Not that she was perfect, I know she could be moody, temperamental, and even a little prone to jealousy, but I couldn't have asked for a better mother, as a friend and as a wise confidante that I could depend on. I miss her greatly.