Nine of Cups -- I Make Prayers My Cup Is Full 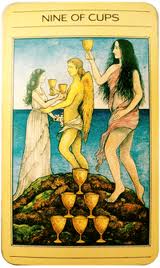 The great synchronicity in this card the Nine of Cups, The Wish Card that I've drawn today is truly a beautiful thing. Representing fruition, comfort and satisfaction are just a few adjectives I'd use to describe my feelings. Mostly though, I am so very grateful.

I went back in my journal to see how long it's been since I haven't had water running from my gravity fed Spring into my taps. It's been since October 21st, ten days.

This morning I plugged in my water pump not expecting any water. I have an open hole in my basement  and  when it rains the water table comes up and I'm able to gather up some water for washing, but only if it's rained. It had been raining over the past week and so as I was getting what water I could. I took quick notice that the sound of my pump was different. I immediately went over to look at the gauge and there I could see the needle gauge that had moved, increasing exponentially! Oh my goodness I was overjoyed and could hardly believe it! I flung my hands  and arms up in the air in praise and thanks!

Prior to this grand event I was beginning to let thoughts of worry creep in, wondering how much longer this drought was going to last, as Winter and freeze up is not far away. I was feeling like I was at the end of my rope and at a complete loss in knowing how this was going to be resolved and conclude.

I haven't seen this kind of drought in the 22 years I've lived here, except twice. The second situation was due to 50 below weather that caused an old underground pipe to freeze and bust. Thankfully I won't have that problem again, having the pipes replaced deep in the ground and won't freeze.

It's common for human beings to take what we have for granted. It's only when we're suddenly without or it's gone, that our attitudes change.

Psyche and Eros have come to the same realization, in that they'd almost lost their deep love for one another. Having now established a firm spiritual foundation, they've made the commitment to build upon their relationship, based on this spiritual foundation. Without this awareness that all life is sacred we will not survive.

Water is sacred. Water represents life itself and without it we will not survive.

Fall down on your knees by the water
Fall down on the muck, sand or slate
Fall down in humility, hope and love
And pray that it’s not too late.