Five of Cups - Attention - The One Cup Left Standing 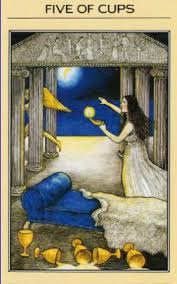 "Attention, taken to its highest degree, is the same thing as prayer. It presupposes faith and love.
Absolutely unmixed attention is prayer.
If we turn our mind toward the good, it is impossible that little by little the whole soul will not be attracted thereto in spite of itself."

We see here Psyche who is in desperate pursuit of Eros. Their relationship seems to have completely gone off the rails. Psyche has shone the lamp on Eros to reveal what he looked like, after he forbid her to ever do so. However all is not lost. Yes there are four cups knocked over, spilling the contents. However one still remains standing, symbolizing what is left will strengthen and sustain their love for one another, not based on will, but based on attention.

Cups representing emotion, and the Five of Cups being about adversity, loss, regret and bereavement makes this card very poignant in meaning for me today. It's been said , if you don't deal with your emotions, they will deal with you.  But how do we do this?

I've come to an important realization over the past week regarding death, loss and how it's fraught with deep emotion, it effects and how continues to affect me, and knowing what I can and need do about it.

Recently our small rural coastal community lost one of our young people to suicide. It's affected all of us in various ways, and degrees, especially affecting the immediate family and friends.

Our culture doesn't cope well with death, and we keep it at arms length. Most of us have grown up with out the skills of knowing what to do or say to those who are grieving. When we're directly affected by the loss of our loved ones, we're often at a complete loss as to how to cope, experiencing overwhelming fear and trauma resulting in Post Traumatic Stress Syndrome, especially if we have had more than our share of tragedy and loss in our lives.

After doing some research on line, I've come to the conclusion my responses to death, are a direct result of my own symptoms of PTSD, having experienced so much loss in my life due to the tragic deaths of loved ones mostly caused by disease. I was really mostly unaware of this, until the past week. I knew my reactions were troubling, disconcerting and probably not normal, but I never consciously attributed them to PTSD. I was mostly left with anxiety, fear and guilt.

I'm relieved to know this, as I can now begin to process and really understand my reactions and feelings that I've been experiencing over the years, and do something about it.

Yesterday I went to see the grandparents of this beautiful young person we lost to suicide. They're both my friends and neighbours. I walked to their house. On the way I became acutely aware of the visceral feelings I was having. Panic, anxiety, pounding heart, all underlined by overall feelings of depression. Regardless and in spite of my feelings, I'd paid close attention to what it was I wanted and needed to do to express my deep sorrow for their loss. Though I was wanting to run away and not go, I continued up the road to see them. I'd made muffins, had a poem in hand and a prayer in my heart, for them, and for myself.
I felt so much better after our visit and my feelings had dispelled. We cried, talked, laughed and shelled beans from their garden. I know we all felt better.


In 1980 I lost my newly wed young husband at the age of 26 to Brittle Diabetes and drug induced Paranoid Schizophrenia. Bill was two years older than this young person who recently died in our community.

People might think, that was over thirty years ago when I'd lost my husband, maybe I should be "over" it. It doesn't matter how long it's been. What does matter is how you cope and what other losses happen adding to the complexity of grief and coping skills. My own self-medicating behaviour through the use and abuse of alcohol, only created more confusion and grief. I was lost until I reached out for help and got clean and sober 22 years ago. But just because you've put the cork in the bottle, doesn't mean everything is all better now.

I remember what a very spiritual man said to me about prayer when Bill died. He talked to me about how prayer is carrying someone in your heart. It's paying attention with faith and love.

Today I live without the use of alcohol, but cannot live without prayer in my life, both for others and for myself. It's the one cup, left standing, that I paid attention to. 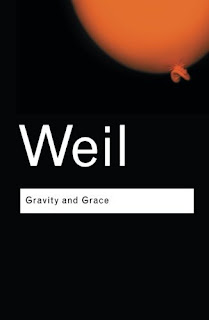 Keeping you close; in my heart and in my prayer
Gentle hugs