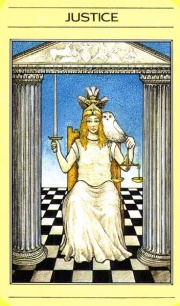 Yesterday I went walking for an hour and a half with my smart and socially conscious neighbour. We some good laughs and especially when she proudly stated that she too was a "nasty woman" that Trump called Hillary Clinton, during one of the last debates.

My good friend became a Canadian citizen many years ago. I asked her if she was feeling upset about the US election. Her immediate answer was " No, not at all, I'm Canadian". I understand why she'd say this, because as Canadians we feel happy and proud to live in our country, though we are far from perfect, but we are grateful.

We commiserated together about how we felt about the whole campaign and the implications of today's election results, concluding  this was a very disconcerting situation to say the list, when considering someone like Trump could actually come out ahead and become President, not because he's the better candidate but  because of voter apathy among those who choose not to vote.

When I drew the Justice card this morning I took note. It's the second time I've seen this Major Arcana card in the last seventeen days and wondered why it's come up again. Then it dawned on me. There could be no better card to see on this election day. It'll truly be a great historic moment if we do in fact see the first American President, a woman, who has long committed herself to social justice all of her life, a champion for woman, families and children.

Hillary's very first run at being president was when she was about 14. She'd offered her name for school president. She was told by one of her male class mates, women can't be president because they're stupid. WRONG!

It will be a grand celebration for women everywhere, if she does become US President, as she follows in the footsteps with the spirit of Athene, the Suffragette Susan B. Anthony , all those who have blazed the trail before and those to come.