Four of Pentacles - A Living Prayer 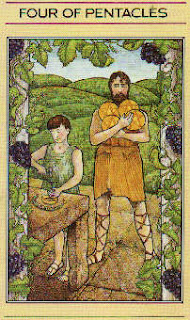 Here in the Four of Pentacles, we see Daedalus tightly gripping his golden pentacles. He doesn't want to relinquish them, and is being consumed with fear of financial insecurity, and the ongoing stability of his life as he knows it. Daedalus is afraid he's going to be replaced by his young apprenticing upstart nephew. Daedalus defines his self-value and confidence materialistically, and by his worldly position.

One of the most significant lessons in my life was learning how to let go. Instead of chasing happiness or believing that it was somehow elusive to me, and was something for everyone else but me; stability and security didn't seem to exist within the confines of structured religion or in financial wealth or position. These were never my pursuits in life. I was on a spiritual quest, as far back as I can remember.

It took experiencing many years of instability and insecurity to finally discover what would make me feel stable and secure. I now know it was eventually found, after realizing my spiritual quest, and when I began to understand the Divine. This is what I had longed for and when life really started to make sense, and it's what would nurture my creativity and nourish my spirit.

Living in a very rural area enables me to feel and understand on a deep spiritual level, a real sense of belonging, independence, mastery and generosity.

It was only when I learned how to let go, that stability and security became more often than not, my reality.
Today, learning to let go, is what I would define as being my living prayer.

"Living prayer" What a beautiful sentiment (and song). It so happens that the four of pentacles is my theme card for this lunation. :D

It is so Ellen. That's what I'd say is real living. Regena Thomashauer (Mama Gena)said it in one of her blog posts. I'd never heard it before! It must be used and referred to in certain circles.

Allison Krauss is one if not my favourite singer song writers, She is a wonderful fiddle player as well. I love her gospel songs. She has one of the sweetest voices ever.

Wow there we go again, synchronized brain waves! I'll be hoppin' over to read what you've posted on your blog about the Four of Pentacles! <3