The Magician - The Guide 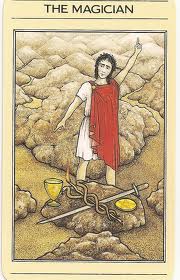 A great card to for me to draw this New Year of 2018. The Magician is embodied by the mythic figure of Hermes. who wise in the knowledge of the heart. The Magician is ruled by the planet Mercury, and embodies the mythic figure of Hermes, who is the guide of travelers, the wanderers, the homeless, guiding souls into the underworld, or what is commonly known as the unconscious.

Hermes became the master of the four elements and, is referred to as the Trickster because he could be tricky and treacherous if one doesn't  rely on their inner resources of the psyche

He is the child of both spiritual light and primordial darkness. The Magician has all the tools necessary at his immediate disposal, that will provide spiritual clarity. He completes the connection between Heaven and Earth, channeling the life force from above and below and represents those who seek to be open to actualizing their creative capacities within themselves.

The Magician and the Moon for me are deeply connected to the intuition, dreams and the unconscious. The Moon provides a dimly lit reflection the Sun, that is, uncertain, and only vaguely illuminates our path as we journey toward higher consciousness. But the Magician enables the spiritual clarity of vision we need to walk the path.

The Wolf Moon that recently coincided with New Year's Eve reinforces this connection and singer Canadian singer Diana Panton  interprets the best rendition of the classic song, Moon River evoking my dreams for 2018 and beyond..