The Moon - The Feminine Principle 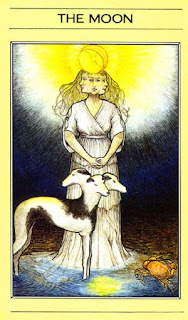 One of the most archaic figures in Greek mythology is Hecate the moon-goddess. She presides over childbirth, magic, death, the underworld, fate and the depth of the unconscious imagination. She has been called The Invincible Queen.

The High Priestess, the Wheel of Fortune and The Moon, all three Major Arcana cards are directly linked.

Hecate embodies the feminine principle of life itself and the three lunar phases reflect her power over heaven, earth and the underworld. It's a card that represents confusion, fluctuation and uncertainty, a trans-personal journey, where a sense of direction and ego are lost and individual boundaries are dissolved.

This scenario describes where I am at right now. at this stage in life as a crone. I'm being tossed along the ocean waves of the unconscious, in what feels like a rather precarious boat. I'm not privy to knowing anything other than I must trust my intuition, to have faith and hope that I'll come safely to shore.

I'm not worried about the destination and have decided to enjoy the journey, come what may.

I've been reading a lot about The dark aspect of the Goddess this last month. The grey cold weather seemed to be very persuasive to do so. when you are not able to do much you get a lot a free time to reflect and journey inwards. Asking who am I without my creative outlets, and so many other aspect of my life? No clip and clear answers were found but I could embrace a feeling of trust that it will be alright. And that was enough for now

Your comment is very timely for me Ellen! Having one of those Underworldly days today. I'm happy you commented because it caused me to read my own post I wrote yesterday. It was a great reminder to me to have faith'! How fast I can forget when I'm in the dark doldrums!

it is so crazy we tend to forget the most important things of life.
Today I realized it has been weeks since I wrote a gratitude entry in my journal.

Yes Ellen I guess we're all trying to remember what we forgot!
Lots of people don't even have gratitude journals so your way ahead I'd say! Lord If I didn't right things down, I'd have no memory left!