Queen of Swords - The Huntress of Perfectionism 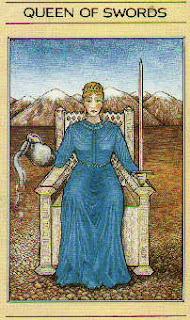 The Queen of Swords embodies the mythic figure of Atalanta the Huntress, who was born the child of King Iasus who'd wanted a male child, not a female. She was rejected and abandoned by her father, left on a hillside, but was rescued and suckled by a bear, who was sent to her by the moon-goddess Artemetis-Hecate.

This card urges us to think before we act, to use our intelligence, to be perceptive and brave. She can seem cool, distant and even calculated. This impression can be seen in her deportment and surface identity. Upon closer look there is an individual who has a great depth of character and influence as a brave woman, and a quick thinker. This Queen, with very high ideals, strives for perfection.

However her high standards may be difficult for many of us to live up too. Her perfectionism, can cause a kind of loneliness, as a result of her unrealistic expectations of others that fall short of her idealism. She is always making an effort to prove herself, and projects this on to others, as a result of her once having been expected to be perfect but failed in doing so.

The message found in the Queen of Swords is that we are human, and therefore vulnerable to being hurt. We may demand superhuman perfection from others and from ourselves, but it more than likely will create problems for us.

Email ThisBlogThis!Share to TwitterShare to FacebookShare to Pinterest
Labels: Athena, Bravery, Perfectionism, Queen of Swords, The Spirituality of Imperfection

Now this is a queen I can relate to; in every aspect of her being. This in contrary to the Queen of Wands in your previous post. It is like you've written this one with me in your thoughts :D

Lol. It wasn't intentional but I have to say you certainly came to my mind when I was writing this post about her! I know you relate very much to this Queen of Swords, like I very much relate to the Queen of Wands. :)Thanks for your great comment Ellen <3