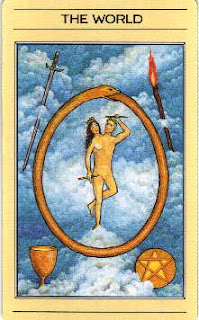 The World card is the mythic image for both God and nature, embodied in one symbol. We see the four symbols presiding over the realms, water, fire, air and earth which await development in the reborn personality.

Lately I came into some extra money. Actually more money than I've ever had. I'm not referring to winning the lottery kind of money or a big inheritance. But simply talking about reaching the age of 65 years which has resulted in modest pensions and then finally managing to sell some of my land.

This has got me thinking today about economic insecurity. There exists 12 Promises in Alcoholics Anonymous. All of these promises with the exception of one, have all been fulfilled in my life. The one that seemed to elude me, was this promise.


Promise 10
Fear of people and of economic insecurity will leave us.

I'll tell you I'm not afraid of people so much any more, especially authority figures and bill collectors and my fear of economic insecurity thankfully has definitely subsided. Being able to effectively pay my bills, no longer having to rob Peter to pay Paul, and now actually be able to put money aside into modest savings, let me tell you it's a huge stress relief.
That said, when reflecting on where fear of economic and financial insecurity originates from, I've learned that it isn't a net worth problem, but a self-worth problem. Understanding this is life changing. I've now begun to free myself from my fear of economic insecurity.

Believing that we're not enough translates into believing that you don't or won't have enough in this world. We are all programed by our parents program of insecurity, that's learned in our early childhood, regardless if we can recall this or not.

Worldly success, freedom and wholeness is attained through spiritual rebirth, not through an accumulation of money, things, fame or an unrealistic image. Although we'll never reach the ideal, found in the last Major Arcana card, The World, as we're imperfect as human beings.

We may glimpse this state when there is inner healing, which provides a resolution of inner peace through the journey of discovery, restoring belief in living awareness of the True Self. 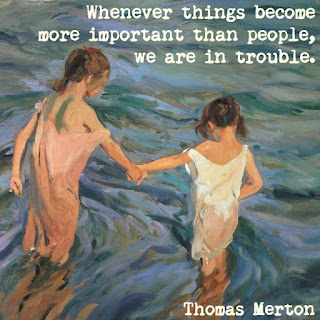 Thank you for your kind comments.

Very nice post about tarot reading. I really like it. Visit here for more information on tarot reading course online.