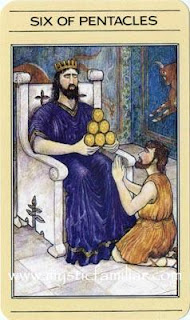 The Six of Pentacles is a card of growth, generousity, charity and giving.

Daedalus has not been the best kind of human being. Here we see Daedalus kneeling and paying homage to King Minos, who knows the extent of Daedalus' actions, but he also knows that Daedalus has suffered, been exiled and humiliated for his crimes, and he has learned many lessons, the hard way. In spite of this the royal King doesn't judge him in a merciless and unforgiving way in which society would. He forgives Daedalus and offers him friendship and generousity in his heart and spirit.

Today is my late big brother's Ralph's Birthday who was ten years older than me. He's been gone for 15 years and I miss him so much and always will. We were very close when I was little. Once I hit adolescence and with all the serious struggles that went on in my family growing up, my relationship with my brother suffered, got complicated and difficult. After I sobered up things got much better, but I was still emotionally bankrupt in many ways and didn't know how to find my way out.

The forgiving and merciful King Minos extends a generous, giving and loving heart toward Daedalus, the way I know my brother extends toward me and I do the same for him. To love and forgive our family is something most of us can't help do, no matter what. Loving our human family is just as important. We are all wounded in some way, have done things we are not proud of because we fell very short in many ways. Perhaps we haven't been the kind of person we should have been or wanted to be. Being forgiven especially by those we love that we have hurt is one of the best gifts we can be given.
What is more difficult, is forgiving ourselves, but we need to this in order to heal, and move forward so we can grow into the people we are meant to be and be happy.

I can forgive everyone easily but sometimes it is just words to keep the peace and I ignore the gnawing feeling underneath it.
When forgiveness is truthful it creates space and light in our burdened hearts as I hope your heart is free form guilt from yesterdays wrongdoings
Hugs

Thank you Ellen. I always remember my forgiveness toward others is what I need to genuinely do primarily for myself. We can love the person hate the behaviour. But we are more than what we do.

I love the way you describe what forgiveness creates, that's beautifully stated.
You know guilt...seems like it's a woman thing. It's come and gone over the years mostly it goes, thank goodness.

When I was going to University in the late 70s, I studied theology and took a course called Personal Philosophy. We could write a paper on whatever we were struggling with. Mine was about guilt! I was one of those people that seemed to feel guilty about everything and then feeling guilty about feeling guilty all the time! Sure am glad those days are gone! There's healthy guilt and unhealthy guilt, my guilt was mostly unhealthy.